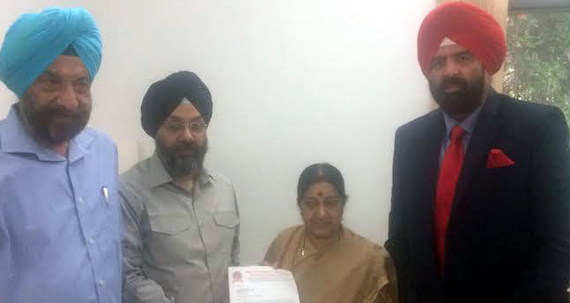 In a letter submitted to External Affairs Minister Sushma Swaraj, who is visiting Iran on Sunday, GK demanded the revival of the Guru Nanak Charitable Trust that belonged to the Indian community. The trust’s licence needs to be restored so that the Indian assets are protected, he said.

The Letter written by Manjit Singh GK, president of the DSGMC, to Sushma Swaraj (MEA, India) reads as follows:

This is in connection with your upcoming visit to Iran. We wish you all the best to take up bilateral issues that will further strengthen friendship and commercial relationships between India and Iranian Republic of Iran. We wish to bring our humble submissions that could be taken up with your Iranian counter part.

It is unfortunate the demographics of vibrant Indian community are dwindling, However unfortunately due to various factors our community strength has come down tremendously as the new generation faces difficulties to seek licensing for work and business opportunities and some families have left for good. Thererefore it is very important that a mechanism requires to be created that leads to increase the demographics and a presence of strong Indian community. A special status could be considered for the Indian community currently resident in Iran mainly comprising by your intervention it would be great support for them.

Few important issues are summarized for your kind consideration:-

1. Revival and Recognition of the Guru Nanak Charitable Trust. The Guru Nanak Charitable Trust belongs to the Indian community, has control of all the properties and assets consisting of Prime Foundations like Indian School building and the Gurdwara Sahib building, its licences and survival need to restored so that the Indian assets are protected for the future Generations as envisaged by our ancestors and the elders.

3. Sikh Religion and the Sikhs in Iran.

4. Issuance of Waiver for obtaining Renewal of Work permits for current holders of work permit and waiver the Indian community members who have been resident over 10 years and their new Generation. The work permits system mandates obtaining a work permit issuance and renewal compulsory for having the right to work in Iran.

5. Residence Permit status. The Residence Permit of Indian Nationals needs to be issued for three year instead of the current one year for those residents in I.R of Iran This would allow them to have peace of mind to continue their business plan on basis of three years and retirements accordingly.

6. Property rights or Licence to buy Property. Each Indian family or their dependants who are resident in I.R of Iran more than 10 years need to be allowed and issued licence to own one house in their name, one office/shop and also be permitted to get industrial licence, land and contribute for the local economy and business growth like fellow Iranian brothers.

7. Inheritance and succession of estate and taxes and duties thereof after death of Indian National.

8. Cremation procedures and requirement of waiver or Open Licence to Cremate Indian Nationals Non Muslims. Cremation Grounds at Tehran owned by the Embassy of India and maintained by Tehran,Gurudawara Sahib immediately waiver or Open licence to be issued for cremation upon death of Indian National /Indian passport holder belonging to Hindu,Sikh ,Budhisim and Jain Religion who honourably need to be cremated as per Indian traditions.

There is need to create awareness to start a process and seek approval of automatic cremation of Indian Nationals as per their religious rites specially for Hindu and Sikh Religion and a decree needs to be passed that they should not be subjected to follow procedure of burial and rather automatically be issued waiver for cremation as per their religious rites based upon the Letter of Embassy of India /Gurudawara Bhai Ganga Singh Singh Sabha Tehran so that the mortal remains of any deceased person are not subject to any delays for the last rites.

The Indian community in Iran aspires through benevolence of the Government of India and in coordination with the Embassy of India to take up the issues raised with the highest authorities of the I.R of Iran that are put on record and earlier petitions were submitted by Gurdwara Bhai Ganga Singh Singh Sabha which has also been taking up all the issues for the welfare of the Indian Community.

Long live friendship of India and Iran. Looking forward to your positive support and immediate intervention.