Conforming this the DSGMC media advisor Parminderpal Singh told Sikh Siyasat News (SSN) over phone that Manjit Singh GK had handed over the charge of DSGMC president to senior vice-president Harmeet Singh Kalka on October 5. He said that Manjit Singh GK was unhappy over the party policies therefore he decided to take a break. 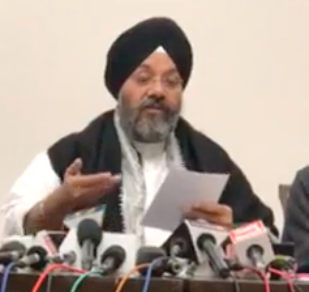 On being asked that if Manjit Singh GK has resigned form the post of DSGMC president, Parminderpal Singh said replied in negative.

“He has not resigned from the post, he has just handed over the charge to senior vice-president Harmeet Singh Kalka”, DSGMC media advisor told SSN over phone, suggesting that it was a temporary measure.

Manjit Singh GK has reportedly gone unreachable and he is not coming to DSGMC office for past few days.

It is notable that SAD (Badal)’s open stance against the Sikh concerns has put many sections of the party in such a position that they are expressing their resentment against the party leadership or to be specific against SAD (B) president Sukhbir Singh Badal’s policies.

Three SAD (B) leaders from Majha, namely Ranjit Singh Brahmpura, Rattan Singh Ajnala and Sewa Singh Sekhwan had expressed their resentment on September 30. They did not participate in party’s recent rally at Patiala on October 7. In this situation Manjit Singh GK’s move has added to the troubles for SAD (B) led by Sukbir Singh Badal.