Manjit Singh GK want US govt. to contain activism of Sikhs for Justice

In the memorandum submitted to Eileen O’Connor, the deputy assistant secretary of state for South and Central Asia, GK alleged that the SFJ had resorted to the abuse of the judicial system. 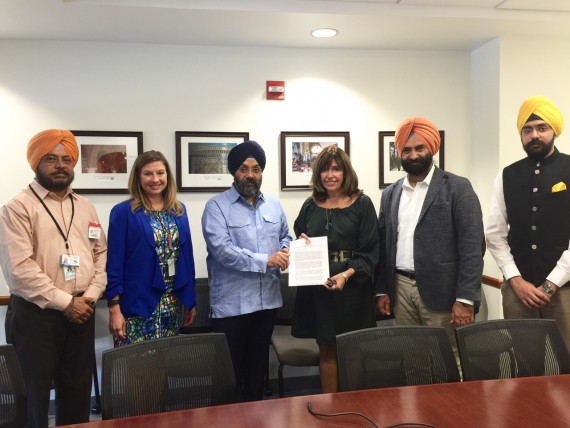 Manjit Singh GK and others meet US officials

“The government of the United States of America should carefully examine and penalise such organisations,” it said.

SFJ and lawsuits against Indian politicians:

The SFJ has been engaged in filing lawsuits against Indian politicians in countries like United States of America, Canada and Australia. SFJ recently moved a lawsuit Indian against Prime Minister Narendra Modi in connection with the 2002 Muslim genocide in Gujarat when he had visited the US in September last year. The lawsuit could not succeed as the US govt. declared in the court that Narendra Modi enjoys immunity since he is the head of a foreign government.

The SFJ had also filed separate lawsuits against Congress president Sonia Gandhi, former Prime Minister Manmohan Singh besides Punjab Chief Minister Parkash Singh Badal during their visits to United States. SFJ had maintained that all these Indian politicians were responsible for being instrumental to human rights abuses and torture on Sikhs in India.

Based on an alleged human rights violations case filed by the SFJ, a New York court had recently issued summons against Manjit Singh GK.

Sikhs for Justice hits back:

“We will make sure that GK-Sirsa duo who are raising funds at the behest of the Shiromani Akali Dal (Badal) for the upcoming Punjab elections are not allowed back in America,” Pannun threatened.

DSGMC working as a took of Indian State:

Independent and concerned observers opine that DSGMC led by Manjit Singh GK and Manjinder Singh Sirsa is turning is working as a tool of the Indian State it’s attempt to control and contain Sikh diaspora activism.