Reforms and development cannot be a substitute for the goal of independence: Dal Khalsa

Amritsar: Whether Arvind Kejriwal, Captain Amrinder Singh or Sukhbir Badal becomes the face of the Punjab after March 11, the position of Sikhs will not change nor do we expect any resolution of the Punjab problem.

The resolution to this effect was adopted in the convention orgnaized by the Dal Khalsa on Indian Constitution, electoral system and right to self determination.

Dal Khalsa reiterated its principle stand of not participating in the assembly and parliament elections under Indian dispensation. The members of the pro-freedom Sikh body today resolve to boycott Feb 4 elections. 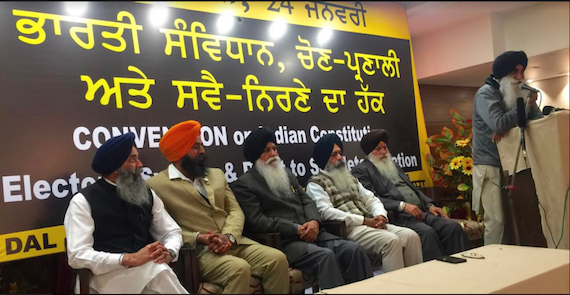 In an another resolution, Dal Khalsa calls upon masses to stay away from 26 January celebrations till constitutional justice is done to the Sikhs to their fullest satisfaction.

Reasserting that Sikhs are a separate people having distinct identity and shall remain masters of its destiny, party president Harpal Singh Cheema said politically, the constitution was supposed to be a bible on federal working, turned out to be a satanic document on centric-working. Religiously, “Sikhs are a not a separate and distinct people but deemed to be part of the large Hindu monolith’. Geographically, Punjabi’s have no full rights over its waters and capital. Judicially, “demands for justice for Sikhs and other people and nationalities are either ignored or delayed beyond expectation.” 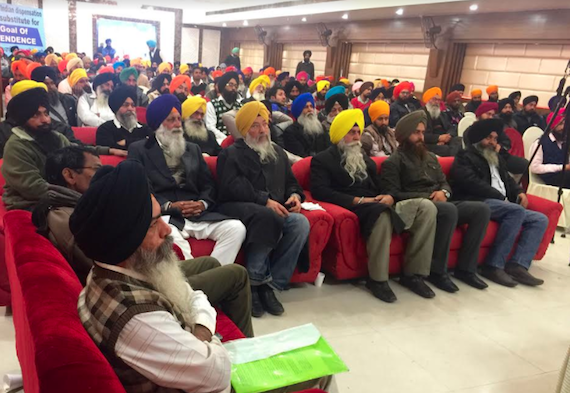 A view of gathering during the convention

He said of late, Supreme Court was reinterpreting religious ethos. Strangely, seeking votes in the name of religion, caste and language is liable to prosecution and annulment of elections, but Hindutva has been given a leeway by terming it as a way of life. He said the Sikhs and Punjab have strongly negated this as we have burning issues of religion and language that impact the lives of the people of Punjab.

In another resolution it was stated that the Dal Khalsa was not against democracy or democratic systems. However, reforms and development cannot be a substitute for the goal of independence. To the real Sikh polity, the challenge is not development, but self-determination.

In a first, Dal Khalsa proposes to contest elections with the right to secede. Party spokesperson Kanwar Pal Singh said they have resolve that the respectable, secure and safe place for the people of Punjab will be possible in an independent and sovereign Punjab. This Punjab of yore can be peacefully achieved either through the right to self-determination under UN dispensation or allowing political parties to contest elections with the right to secede as the main election plank by amending the Constitution. Catolians in Spain, Quebec people in Canada and the Scots in Scotland in the recent past have had occasion to make this their major poll promise.

As members of the Sikh nation, we reflect upon the years gone by on the eve of the Republic day of India, said senior leader H S Dhami. He said the present constitution has been amended more than 100 times since 1950 but not once to redress the gross injustice to Sikhs. Even the present Chief Minister Parkash Singh Badal has burnt the copies of the article 25 in Delhi as a mark of protest in 1982.

AISSF head Karnail Singh Peermohammad said the awakened Sikhs know in their guts that making ground for Arvind Kejriwal to gain foothold in Punjab was fraught with danger. However the anger and resentment against Badals for denigration of religious institutions, sacrilege incidents and misrule was to the extent that a section of good Sikhs has tilted towards AAP to teach SAD a lesson and unseat father-son duo.

SYP head Paramjit Singh Tanda and spokesperson Prabhjot Singh said “Our national aspirations are too dear to be sacrificed at the altar of this game of elections where money, liquor, drugs and all arms of the state work in tandem to upset apple-carts of individuals”.

Dal Khalsa expressed solidarity with all constituents of the Hurriyat Conference in Kashmir who do not accept the hegemony of India and are determined to achieve their independence.