Amritsar/ Chandigarh: A fake copy of a letter went into circulation over social media yesterday (Feb. 03, 2017) in wake of ruling Shiromani Akali Dal (Badal)’s controversial move to join hands with Dera Sauda Sirsa- a sect against which a Hukumnama was issued by the Akal Takht Sahib on 17 May, 2017.

The letter is purportedly a doctored/forged document on the letter head of Akal Takht Sahib. It contains date 03/04/2017 besides signatures of Giani Balwant Singh Nandgarh as Jathedar of Takht Damdama Sahib (who was discharged the post long ago). 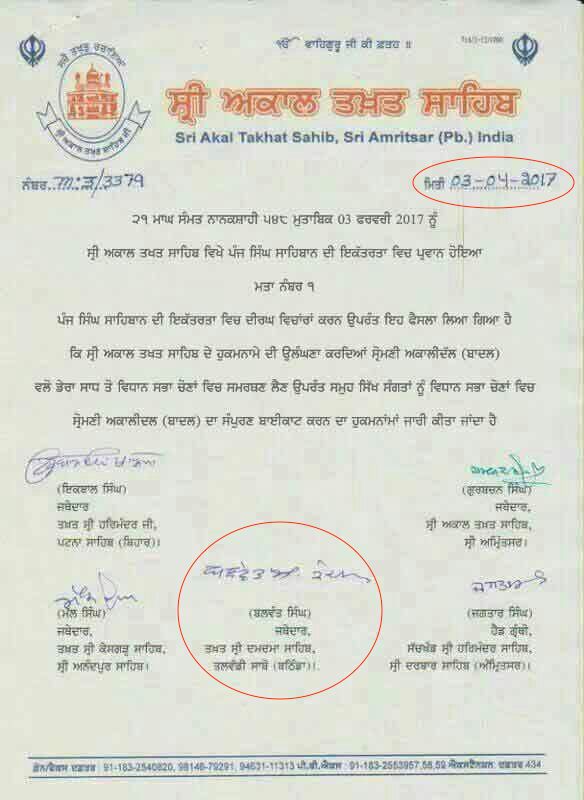 A copy of the document

The document says that the Singh Sahibs (five Jathedars) have called for social and political boycott of the Shriomani Akali Dal (Badal) in wake of the party’s decision to join hands with the controversial Dera Sauda Sirsa.

In a statement issued late Friday evening by Shiromani Akali Dal (Badal)- the Shiromani Gurdwara Prabhdank Committee accused the Aam Aadmi Party (AAP) for forging the document and making it viral over social media. [Notably, the statement of SGPC was issued by the SAD (Badal)].

The Aam Aadmi Party was quick to respond to SGPC’s allegations. In a statement issued late Friday evening AAP said it had no role to forge or make viral the alleged fake letter/Hukumnama.