Chandigarh: It seems that widespread criticism over government failure to curb illicit drugs trade in Punjab has some impact on Punjab CM.

Capt. Amarinder Singh, who has been on denial mode maintaining that his government has cut the chain of drugs supply in state and recent deaths were not related to drugs abuse, today admitted that the recent deaths across the state were related to deaths. A press statement issued by CMO states that the Chief Minister today “ordered investigation into the recent spate of drug-related deaths followed by stringent action against those found guilty, without consideration to their political affiliations”.

Few days back Capt. Amarinder Singh had said that the death were not cause by drugs abuse but the victims died after injecting anti-addition medicine. Just two days back Punjab Congress leader Sunil Jakhar had also repeated the same claim.

Awareness movement “Black Week Against Chitta” has pressed the government to come out of this denial mode. 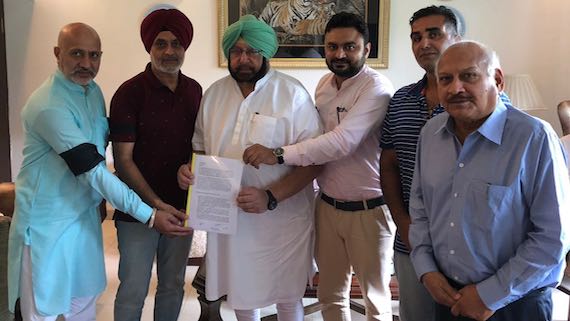 According to the CMO statement: [the group] welcomed the stern steps taken by the Captain Amarinder Singh government, which they said had brought about a perceptible change in the public mood and perception about the issue.

The Chief Minister said he would hold a meeting at 3 p.m every Monday to review the progress of the fight against drug menace.

“Captain Amarinder Singh promised all cooperation to the activists in creating awareness against drugs and suggested that they organize rallies and candle marches in villages, in coordination with Anti Drug Abuse Prevention Officers Program already launched by the government. DCs and SSPs should participate in such events, he added”.

As per the release: [t]hanking the Chief Minister for his time, which they said showed his intent and seriousness on the issue, the activists suggested formation of committees, consisting of 10-15 youth each, in villages to identify drug addicts. Private hospitals should be asked to provide treatment to drug addicts, they suggested, in response to which the Chief Minister asked Health Minister Brahm Mohindra to talk to private hospitals for reservation of some beds for addicts.

“The group expressed concern over the ‘deep nexus’ between drug dealers and police personnel, especially at the SI and ASI levels. People were afraid to identify such cops, they said, urging strong steps to build confidence among the citizens”, the statement reads further.

As per the government’s press release [t]he activists suggested steps to ease out traditional intoxicants such as “Bhukki and Afeem”, besides medical examination of all addicts. A helpline should be introduced for drug addicts, they added. They also suggested that a lady officer be deputed in the STF to help weaning women away from drugs.

The CMO statement notes that Mintoo Gurusaria, a reformed drug addict, who said he had got into drugs on his own, revealed that he had been weaned out of drugs with the help of substitutes.

Mintoo Gurusaria said in a Facebook live after the meeting that they group met Capt. Amarinder Singh while waring black tokens as a part of their “Black Week Against Chitta” movement.

He said that the time of meeting was 20 minutes but the meeting went for 1 hour. He said Capt. Amarinder Singh listen to them carefully.

He said that the group requested CM to give “free hand” to STF against drugs and include an female IPS officer in the said STF.