Rajdev Singh who formally joined the Hindutva outfit with Sikh faces at it’s Delhi based office, has reportedly been asked to work for Rashtriya Sikh Sangat in Malwa region. 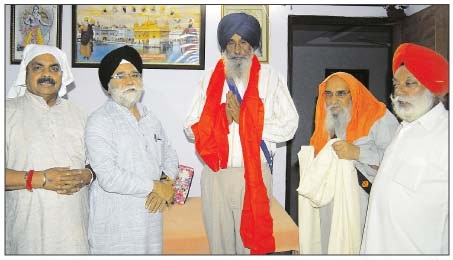 Rajdev Singh was elected as member of Indian Parliament on the ticket of Shiromani Akali Dal (Amritsar) in 1989 from Sangrur parliamentary seat.

To read this news in Punjabi, Click Here or visit SikhSiyasat.Info

It is notable that there is a sudden rise in RSS activities in Punjab after the formation of Narendra Modi led Hindutva government in India. The Hindutva fountainhead has revived it’s controversial wing called Rashtriya Sikh Sangat (also called RSS). Rashtriya Sikh Sangat was formed by the Sangh to conduct Hindutva activities while projecting Sikh faces and thereby execute it’s plans to secure assimilation of Sikhs to Hindutva fold.

It may be recalled that on 23 July, 2004 the Rashtriya Sikh Sangat was declared an ‘anti-Sikh outfit’ by Akal Takht Sahib. A Sandesh (message) issued from Akal Takht Sahib under the signatures of five Sikh Jathedars had clarified that activities of the Rashtriya Sikh Sangat as well as the RSS were harmful for the Sikh nation, thus both these controversial bodies were declared ‘anti-Sikh’.