Chandigarh: In a series of ongoing daily peaceful protest advocates of Punjab and Haryana High Court under the banner of Lawyers in Solidarity with Farmers (LSF) showed solidarity with the farmers against the three Farm Laws passed by Parliament.

Walked one and half kilometers towards Haryana side for tweeting the updates. See the pic. That’s the situation close to barricades and stage. pic.twitter.com/4ox5bc2yAL

A good number of advocates expressed their concern over the ongoing Kisaan Agitation and condemned Central Government for using Jammer’s at the protest sites to gag the voice of protester’s, advocates asserted that by using jammer’s the Central Government is violating Fundamental Rights i.e “Right to Know and Right of Information” as granted under the Constitution of India. 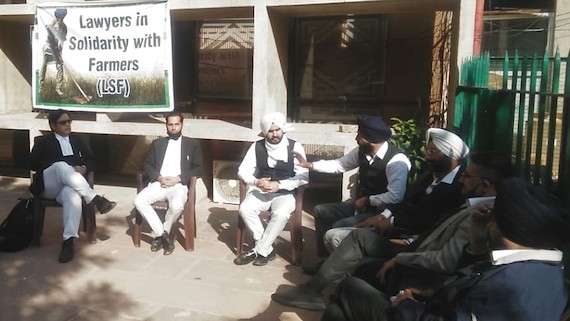 Lawyers in Solidarity with Farmers

Advocates gathered at the dharna at Punjab and Haryana High Court also endorsed the call given by farmers organizations for ‘Bharat Bandh’ and also requested to legal fraternity to support the call of farmers which has also been endorsed by Punjab and Haryana Bar Council.

Group of Advocates gathered under the banner of Lawyers in Solidarity with Farmer (LSF) also decided to commemorate International Human Rights Day 2020 on December 10 in solidarity with ongoing farmers agitation.