Brampton, Ontario: The Ontario Gurdwaras Committee (OGC) has strongly condemned the beadbi that took place during the Anand Karaj on Thursday July 4th 2019 at Halton Sikh Cultural Association. “There is no excuse or justification for the events that transpired”, the OGC said.

Notably, a video of Anand Karaj had gone viral which showed that chairs were used for the bride and groom during the Anand Karaj ceremony held at Halton Sikh Cultural Association on July 4.

On July 6th 2019, representatives from all OGC member gurdwaras met with the management committee of Halton Gurdwara to discuss details of the tragic events that transpired and discuss the appropriate recourse. This meeting took place at Sri Guru Singh Sabha Malton. The Halton Gurdwara Committee presented the details of the events including the disability request for the groom from the family and alternatives that were discussed leading up to the Anand Karaj. There was a clear mismanagement and lack of oversight on their part in regards to the Gurdwara Sahib and their duties to ensure the sanctity of the Guru’s Darbar. For this the Halton Gurdwara President and committee took full responsibility and requested forgiveness from the Guru Panth.

“Due to the scale and gravity of this event, the Ontario Gurdwaras Committee recommendation for those involved was to present themselves to the Panj Pyarey, Sangat and Sri Guru Granth Sahib Ji as per the Sikh Rehat Maryada”, a release by OGC reads.

“On Sunday, July 7th 2019 the Panj Pyarey, local sangat and representatives of gurdwaras and Sikh organizations from the Greater Toronto Area were present at Halton Gurdwara. The Halton committee, head granthi as well as the kirtani jatha that performed the Anand Karaj presented themselves in front of the Panj Pyarey and Sri Guru Granth Sahib Ji prepared to accept any direction or seva decided by the Panj Pyarey”, statement reads further.

“In addition to monitoring this case to ensure full the Sikh Maryada is followed, the OGC will conduct a thorough review of all Anand Karaj related processes in Ontario. We will be communicating with the sangat and gurdwara management committees’ guidelines to be followed to prevent similar events from occurring again. We encourage Sikh organizations worldwide to do the same”. 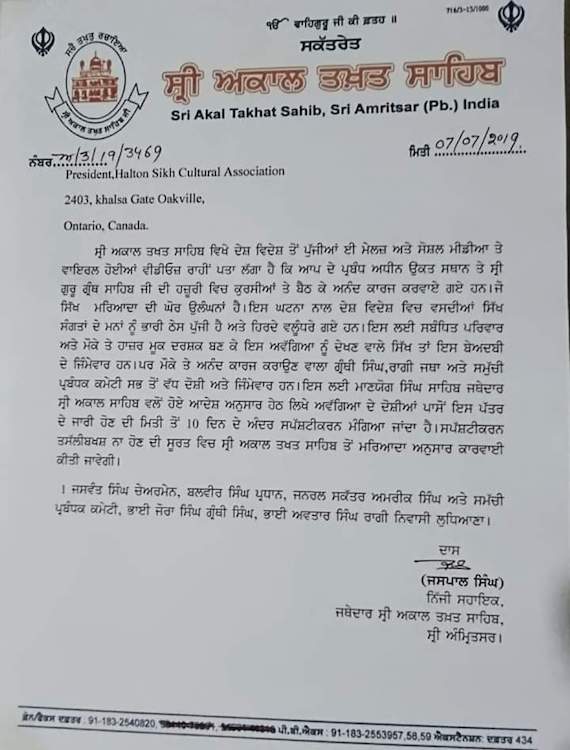