As per media reports Ludhiana legislator Simarjit Bains had got aggressive over not being allowed to raise the issue of Punjab government’s failure to seek consideration for releasing water to Rajasthan. He reportedly defied the Speaker’s order following which, the Speaker told the watch and ward staff to remove Simarjit Bains from the House. 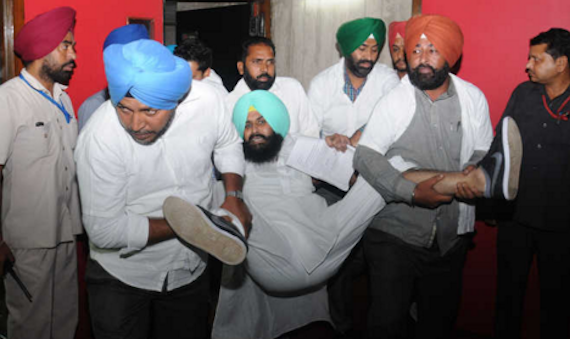 Simarjit Bains being taken out of the Vidhan Sabha [September 09, 2016]

As per media reports Balwinder Singh Bains, also joined the protest by his brother and both brothers were forcibly lifted and taken out.

“This is the first instance in this session that someone has been ordered out by the Speaker for defying his orders”, notes the The Tribune.

“Simarjit was thrown out of the Assembly building on the road and his kurta was torn in the process. The Bains brothers have asked the Punjab government to seek Rs 16 lakh crore from Rajasthan as the water bill”, The Tribune notes.