Chandigarh (August 14, 2014): According to press release by EcoSikh, under the aegis of Sri Ganga Nursery of Zirakpur the historical Gurdwara Nabha Sahib is all set to inaugurate its first ever green patch on 16th August, 2014 at 10AM. Jathedar Giani Mull Singh Ji of Takhat Sri Kesgarh Sahib will offer prayers and plant the ceremonial tree. Many Sikh delegations from SGPC and Punjab government are arriving grace the special environmental event at the Gurdwara sahib.

It was very recent when the Shiromani Gurdwara Parbandhak Committee handed over this project to the proprietor of Ganga Nursery and a leading environmentalist, Bhai Manjit Singh who is famous for reviving the historical Naulakha Garden of Guru Har Rai Sahib at Kiratpur Sahib on Sikh Environment Day, 2012. 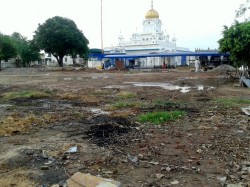 As per EcoSikh’s recent telephone interview with Bhai Manjit Singh, this one acre piece of landscape will include hundreds of plants, ornamental trees and shrubs, water features and other landscaping material. This 20 lakh rupees project will take about three years to accomplish as per Manjit Singh who is bearing all the costs. Bhai Manjit Singh humbly says, “I feel privileged that Guru has chosen me for this sewa. I also feel proud of SGPC for initiating such projects and having trust in me. Though Ganga Nursery is determined to bear the expenses for this sewa, but I am always open for donations, which can help completing the projects well in time and can extend the scope of this green kar sewa.”

As per the plan ornamental trees like Mauraiya, Fox Tail Palm, Ashoka and variety of Ficus will be planted to beautify the park and along with that Punjab Environment Society will be planting ten traditionally special fruit trees which are used in pickles viz; dheu, desi amla, hararr, desi mango and baramasi nimbu (lemons). Since ages this historically significant Gurdwara had only a few existing fruit trees and the open land associated to the Gurdwara (now the project site) had debris and all kind of waste material. Sharing the emotions said Bhai Manjit Singh, “I always feel that Guru’s house should look fabulous, we being Sikhs must make them superior than our own homes. I pray I would continue the preservation of all the historically important gardens of our Gurus.”

From last 25 years this Sikh environmentalist has been selflessly working to make the historical Gurdwaras of Punjab green. So far Ganga Nursery has executed projects in Fatehgarh Sahib, Paunta Sahib, Kesgarh Sahib, Kiratpur Sahib, Chamkaur Sahib spending majority of the amounts as sewa, out of true love for the Guru and the nature.

History of Nabha Sahib: It is the place, where the tenth Guru, Guru Gobind Singh ji came to bless the Muslim fakir, Dargahi Shah, who offered shelter to Bhai Jaita ji, while he was carrying a huge sewa of delivering Guru Tagh Bahadur ji’s sacred head to Guru’s family on his way to Anandpur Sahib, after he was beheaded by the Mughal Emperor, Aurangzeb at Chandni Chowk in New Delhi. Later in 1710, this was the place where Banda Bahadur raised the Khalsa Army and said his final prayer to destroy the city of Sirhind and execute Nawab Wazir Khan (the then Governor of Sirhind) who was responsible for the cruel slaughter of two younger sons’ of Guru Gobind Singh.