Chandigarh: Alarmed by accounts of police violence and ill-treatment across India during the imposition of a nationwide lockdown on 25th March, a group of human rights defenders campaigning against custodial violence and torture in India has reminded the Government of India that human rights must be “protected and accountability ensured even in exceptional circumstances”.

The Coalition Against Torture, a group of human rights organisations and independent actors, expresses its concern over allegations of ill-treatment and excessive use of force by the police while enforcing lockdown orders and reminds the Government that no exceptional circumstances, including the current COVID-19 lockdown, can be used as a pretext to justify torture, cruel, inhuman or degrading treatment or excessive force. 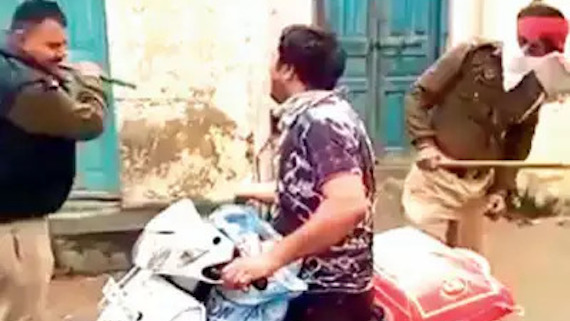 In a statement, endorsed by Amnesty International India, Human Rights Alert (HRA), J&K RTI Movement, National Campaign on Dalit Human Rights (NCDHR), People’s Watch, Prof. (Dr.) Y.S.R. Murthy, O.P. Jindal Global University (OPJGU), as an independent expert Quill Foundation, Commonwealth Human Rights Initiative (CHRI) and World Organisation Against Torture (OMCT) said: [i]ncidents of ill-treatment and abuse have been reported in several states. Videos have surfaced on social media showing the police beating people with sticks and batons. In Bareilly District, Uttar Pradesh, migrant workers were sprayed with disinfectants by local officials. The disinfectant was a mixture of water and bleaching powder, the latter used to sanitize buses. In Punjab, Uttar Pradesh, Tamilnadu and Uttarakhand, people who violated the curfew were forced by the police to assume stress positions such as prolonged squatting and the “murga” punishment. More recently, a 50-year-old farmer died after allegedly being beaten up by the police in Jabalpur, Madhya Pradesh.

The Kerala High Court has taken it on itself to monitor State action during the lockdown period, saying that it “cannot turn a blind eye” to “excesses” committed by police personnel. The Court also cautioned that “the fundamental right to life and personal liberty, under Article 21 of our Constitution, cannot be suspended even during an emergency”.

“Police and governments cannot use enforcement of the lockdown as a cover for torture, inhuman treatment, or abusive use of force. The judiciary’s role of oversight is more important than ever” says the Coalition. Taking a cue from Kerala, the Coalition calls on state High Courts to monitor state actions while enforcing restrictive measures and urges the National Human Rights Commission to take visible and clear action on the issue.

While recognising that the police personnel are themselves at risk when responding to the call of duty in the prevailing extraordinary situation, the group emphasises that police actions need to be informed by the spirit of public service, girded by the Constitutional framework and respect for human dignity.