New Delhi: Senior lawyer HS Phoolka along with BJP leader RP Singh, on Nov. 19, released the old video of former prime minister Rajiv Gandhi in which he is seen justifying the Sikh genocide 1984 following the assassination of Indira Gandhi by saying “when a big tree falls, the earth shakes”. The two leaders also released a joint (written) statement during the press conference held in New Delhi yesterday.

The statement, in verbatim, reads as follows:

New Delhi 19. November, 2015. 31 years back on this day i.e. 19th November 1984, Shri Rajiv Gandhi the then Prime Minister of India had justified the killing of 3000 innocent citizens of this Country by saying that “WHEN THE BIG TREE FALLS THE EARTH SHAKES”. The huge crowd, whom Shri Rajiv Gandhi was addressing at Boat Club, lauded this justification of Shri Raj, Gandhi by Clapping. This crowd mostly comprised of the workers of Congress and Congress leaders who had indulged in the killing of the Sikhs just 2 weeks earlier.
Further, Shri Rajiv Gandhi rewarded the leaders whose names prominently figured in killing of the Sikhs. Name of

Jagdish Tytler appeared in newspaper and also in the reports of the Human Rights group. Tytler was made the Minister for the first time in December 1984. The name of H K L Bhagat prominently figured in killing of the Sikhs. Bhagat was promo. from State Minister to full-fledged Cabinet Minister in December 1984. Rajiv Gandhi government did not even register cases. For Rajiv Gandhi government thousands of these Sikhs killed meant nothing. He didn’t even bother to count the dead bodies of these innocent citizens. His Home Minister gave statement in Parliament on 14th November that only 650 Sikhs were killed throughout the country.

The video-footage of Rajiv Gandhi speech is played today during the Press conference and a copy is given to
A Prime Minister who takes 3 years even to count the dead bodies of innocent citizen killed in open broad day- light in the Capital, A Prime Minister who justifies the killing of the innocent citizens, definitely does not deserve Bharat Ratna.

We therefore call upon the government to withdraw the Bharat Ratna conferred upon Rajiv Gandhi. 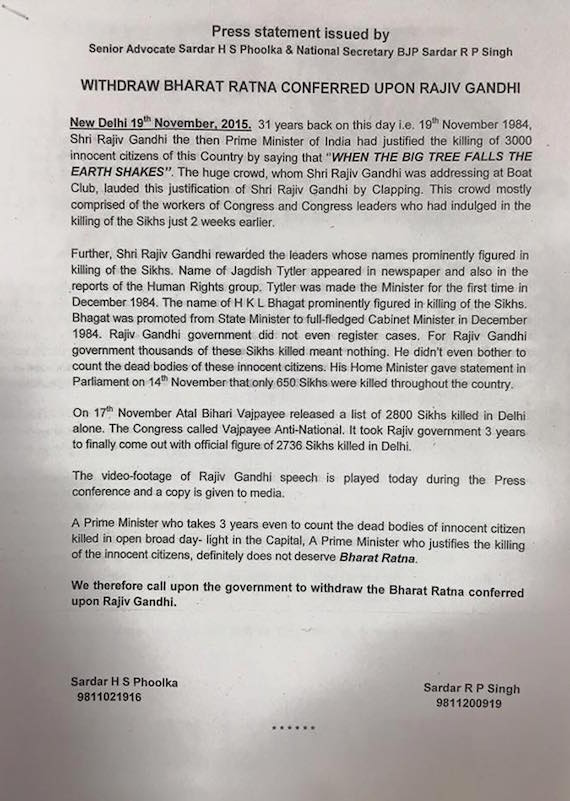