In its annual report, it noted that discrimination and violence against minorities and particularly against Muslims is rising in India and is being actively endorsed by local or religious officials. 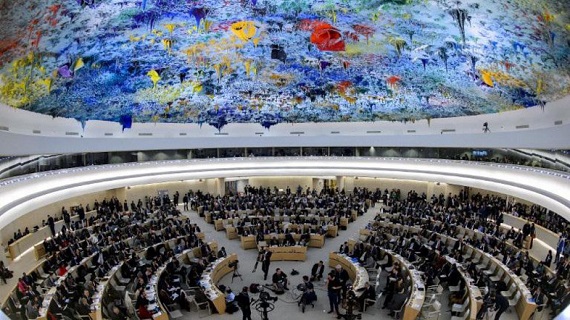 A press released issued by the Foreign Office (FO) of Pakistan, reportedly said that Pakistan raised the issue of India’s human rights violations in occupied Jammu and Kashmir during the 37th session of UN Human Rights Council in Geneva.

Whilst speaking on the issue Pakistan’s Deputy Permanent Representative, Tahir Andrabi purportedly called on India to stop killing Kashmiris, end the impunity of its security forces and allow access to a UN fact-finding team to investigate the human rights violations there.

“India’s denial of access to the UN fact-finding team is a desperate attempt to hide its atrocities in the most militarised zone of the world”, Tahir Andrabi reportedly said.

India must end its illegal occupation and resolve the Kashmir dispute in accordance with wishes of Kashmiri people as laid down in numerous UN Security Council resolutions, he further added to his statement.

Meanwhile, the Indian side resorted to name calling as a response to Pakistan’s charges regarding human rights abuses of Kashmirs and other ethnic minorities by the Indian state.

“Even as terrorists thrive in Pakistan and roam its streets with impunity, we have heard it lecture about the protection of human rights in India,” reads the quote from the claim made by  Mini Devi Kumam, a Second Secretary at the India’s UN Mission in Geneva, published in an English vernacular.

“We await credible action by the Government of Pakistan to bring all those involved in the 2008 Mumbai attack and the 2016 Pathankot and Uri attacks to justice.”

“The world does not need lessons on democracy and human rights from a country whose own situation is charitably described as a failed state,” she further claimed in her statement.

What is notable here is that on the one hand the Indian delegation is defending its position on human rights abuses  and are claiming to be the savior and defenders of human rights of its citizen. But the report released by Amnesty International (an International Human Rights Watch group) present completely different story and contradicts the very claim made by the Indian representative in the UN Human Rights council.

In its report titled “State Of World Human Rights” the Amnesty International has termed South East Asia in general and India in particular as the most dangerous place for being a religious or ethnic minority.

Later in the meeting the Pakistani representative Tahir Andrabi, whilst countering the Indian side stated that the Kashmiri’s struggle for a ‘right to self-determination’ cannot be dubbed as terrorism.

“Pakistan keeps referring to UN Security Council Resolutions on Jammu and Kashmir. However, it very conveniently forgets its own obligation under these resolutions to first vacate the illegal occupation of Pakistan Occupied Kashmir”, reads the quote from the statement of Mini Devi Kumam published in The Tribune (TT).