New Delhi: Indian Home Minister Rajnath Singh today announced government’s decision to impose ban on screening of a documentary titled “India’s Daughters” in India. The documentary is made by a British filmmaker Leslee Udwin. India’s Daughters is said to be based on December 16, 2012 gang-rape in Delhi.

Rajnath Singh’s statement triggered heated debate in upper house of Indian Parliament called “Rajya Sabha”. Rajnath Singh had said that the government has taken necessary action to stop the telecast of a documentary based on the interview with a convict in the Dec 16 gang-rape case. 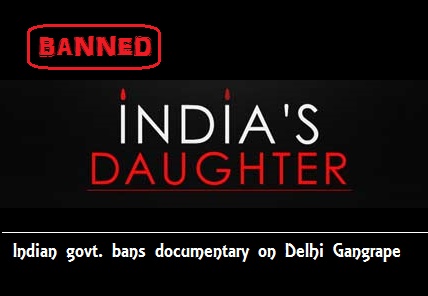 It is notable that in the documentary, Mukesh Singh – one of the four men sentenced to death for the brutal gang-rape and killing of a young woman in a moving bus in Delhi – has been interviewed by British filmmaker Leslee Udwin, who obtained legal permission to speak to the convict at Delhi’s Tihar Jail. In the interview, Singh has displayed an appalling lack of remorse, blaming the victim for the rape.

Making a statement in the Rajya Sabha, the Home Minister said government condemns the December 16, 2012 incident and will not allow to leverage such incidents for commercial use.

“It has come to the notice that the said interview was scheduled to be telecast by BBC-4 on International Women’s Day on March 8,” said Rajnath Singh, adding: “Our government condemns the incident of 2012. The government has taken necessary action and secured a court order restraining telecast of the film,” the minister said.

Certain members of Rajya Sahiba questioned Indian government’s move to ban the screening of the documentary.

“I concede that there is an issue on who gave the permission and all that, but the reality is what the man spoke reflects the view of many men in India and why are we shying away from that? In glorifying India and (saying) we are perfect we are not confronting the issues that need to be confronted,” said Anu Aga.

She said banning the documentary was not the answer.

“We have to confront the issue that men in India do not respect women and any time there is a rape, blame is put on the woman that she was indecently dressed, she provoked the men”, she added .

Lyricist Javed Akhtar, who is also a member of the Rajya Sabha, said: “It’s good this documentary has been made. If any one finds it objectionable, they should change their mindset”.

But BJP MP Meekashi Lekhi supported the government’s move to ban the screening of documentary. “The sense of this House is signalling to the government to not let this documentary air. There should be proper investigation in this matter. This affects tourism… the police should take appropriate action… they should be charged under appropriate sections”, she said.