Mansa: Maintaining that Punjab stands colonised in all respects, the pro-freedom Sikh group Dal Khalsa said the (read Indian) democracy that disallows right to self determination and carries archaic laws in its statute to stem dissent and suppress freedom of expression is neither real nor practising. 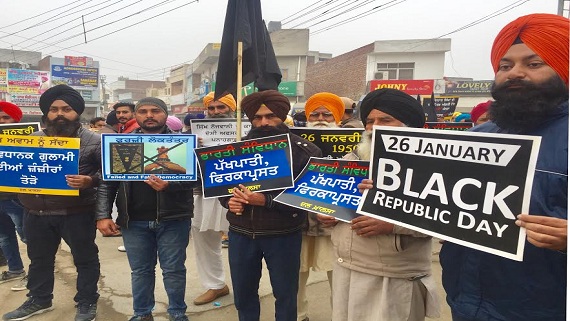 While India observes its 69th republic day, the Dal Khalsa staged a spirited protest against what they call Constitutional wrongs, injustices and denials. Protesters chanted Freedom to Punjab slogans.

Terming the Jan 26 as black republic day, party spokesperson Kanwar Pal Singh said the unprecedented transfer of population against the will of the people of undivided Punjab, the massacres of thousands, the subsequent denunciation of basic rights of the people of divided Punjab, the usurpation of our resources, the desecration of our religious places, the killing of our youth extra-judicially, the destruction of our religious ethos through assimilation and interference, the exodus of our population for economic reasons to greener pastures beyond the shores of their homeland -all are a clear manifestation of the colonisation of Punjab.

The pro-freedom Sikh group sought from country’s dispensation to show magnanimity and allow the struggling peoples residing in the peripheral states of the country the ‘right to self determination and right to secede’ in the light of the supposed commitment made by India’s first PM Jawahar Lal Nehru in his speech broadcast on 3rd June 1947.

They termed Jan 26th as a day of deceit and assimilation, as they believe that with the adoption of present Constitution, the Indian State had robbed the Sikhs of their identity, natural resources and foisted Hindu laws on the Sikhs.

Hundreds of activists of the group carrying black flags, placards and banners to convey their message held a rally at busiest chowk in the city for two hours. One of the banner chided the UN and Five UN Security Council permanent members for not doing anything to ensure that India respects and implement the right to self determination in letter and spirit.”  Castigating that Indian Constitution has failed the Sikhs and other minorities, the banner reads “Constitution says No to separate Sikh status, Sikhs say No to Constitution”. 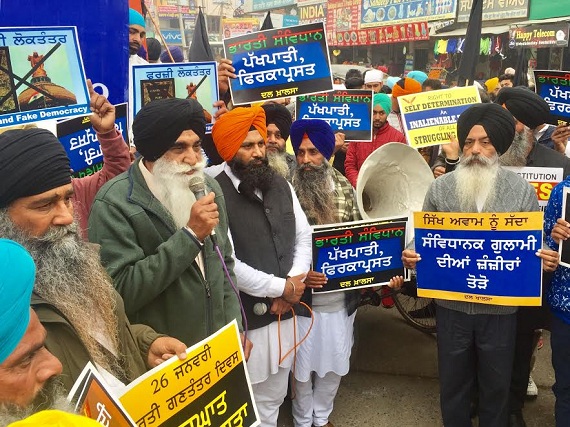 Party head Advocate Harpal Singh Cheema said self-determination is the inalienable right of all nationalities and peoples including people of Punjab and Kashmir. People of both the states are struggling to get the right and are facing hawkish Indian state, which has not only denied them their right but crushed and stifled their rightful aspirations to be free by portraying them separatist and classifying their demand as illegal and parochial.

Furthermore, he said the right to secede was recognized by the Geneva Convention. Many countries have attained independence through plebiscite. It is not unconstitutional. “We believe the only way forward to resolve all disputes are through right to self-determination”, he maintained in his statement.

Justifying their groups protest against Indian Republic day, he termed ‘India as Janus-faced’. While India might have won some brownie points on diplomatic front, what is amply clear is that in the domain of intolerance and rights abuses, India has surpassed all others. He urged the western world not to ignore this aberration of the Indian state at the cost of commercial and economic interest.