Brampton: Where as Indo-Canadians marker India’ Republic Day on Sunday (February 01) at the Pearson Convention Centre in Brampton, a number of Sikhs and Kashmiris held demonstration outside the venue to protest against ‘forceful occupation’ of their homelands by the Indian state.

‘Federal, provincial and municipal politicians in Peel were among a long list of dignitaries at the event that included Canada’s Citizenship and Immigration Minister Chris Alexander and Consul General of India Akhilesh Mishra. The festivities were hosted by Panorama India’, notes a Brampton Guardian news report. 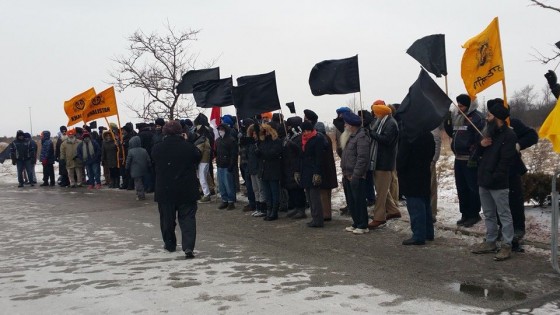 Under the watchful eye of Peel police, protesters waving bright Kesri flags in support of establishing the Sikh state Khalistan demanded India get out of Sikh and Kashmiri homelands.

The protesters accused the Indian government, dominated by a Hindu majority, of systemic human rights abuses targeting the minority Christians, Muslims and Sikhs in India.