A writeup titled “Innocents no more”, penned by academician and thinker Partap Bhanu Mehta has appeared in The Indian Express’s January 7, 2020 edition.

Sikh Siyasat has extracted some excerpts of the write-up in order to share it with the readers of the Sikh Siyasat News.

“The aim of the government may or may not be literal annihilation of its citizens. But its aim certainly is that it annihilates our will, our reason, our spirit, so that we all become willing supplicants in its ideological project.”

The current political regime cannot exist unless it finds a new enemy. It now legitimises itself, not by its positive accomplishments, but by using the enemy as a rallying point.

India is governed by a regime whose sole raison d’etre is to find an adversarial rallying point and crush it by brute force.

Victims of This Violence:

The targeting of enemies — minorities, liberals, secularists, leftists, urban naxals, intellectuals, assorted protestors — is not driven by a calculus of ordinary politics. It is driven by will, ideology and hate, pure and simple. 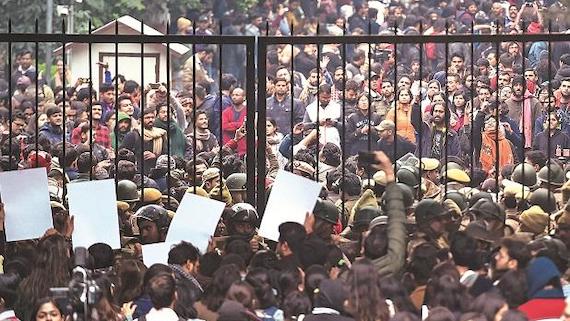 The state will, directly or through proxies, encourage violence against anyone who is not in tune with it.

When you legitimise yourself entirely by inventing enemies, the truth ceases to matter, normal restraints of civilisation and decency cease to matter, the checks and balances of normal politics cease to matter.

All that matters is the crushing of real and imaginary enemies, by hook or by crook.”

Different Levels of the Violent Tactics:

“This violence is apocalyptic in another sense: Its purpose is to foment more violence, so that targeting enemies becomes self-fulfilling. The logic is: Apply force and intimidation. If it succeeds, all well and good. If it does not succeed respond in two ways. One is to ideologically discredit the opposition even more. The pattern is depressingly familiar. The attacks on JNU will be presented as some kind of “left-liberal” conspiracy.

What Should Be The Response:

“There has to be an absolute refusal to patronise anyone who normalises the “tukde tukde gang” talk — licensing the militarisation of domestic politics.

There has to be institutional accountability: From the JNU VC to the home minister.

But, this moment will also require the forces of protests to be more visible in the peaceful and dignified way they have been over the last few days.

The government’s strategy is not to solve old issues; it is to divert attention by bringing in new adversaries in the hope that we remain divided. But now the movement against the government has to turn this very fact into an advantage.

The one thing the violence in JNU, and Delhi more generally, should bring home is that plain truth: In the eyes of this government, no one is innocent. None of us have the choice to even pretend otherwise.”

∗ About Author – Pratap Bhanu Mehta is Contributing Editor at the Indian Express. He has been vice-chancellor of Ashoka University and president, Centre Policy Research, New Delhi, one of India’s top think tanks. Before he started engaging with contemporary affairs, he taught political theory at Harvard, and briefly at JNU. He has written extensively on intellectual history, political theory, law, India’s social transformation and world affairs. He is the recipient of the Infosys Prize, the Adisheshiah Prize and the Amartya Sen Prize.