Amritsar: Recent reports in various media outlets have endorsed the fact that Israel’s Mossad had trained commandos who had attacked the Darbar Sahib (Amritsar) in June 1984. Earlier Britain’s secret documents declassified under 30 year rule had revealed that the British agencies had helped Indian state to plan and execute sinister attack on Darbar Sahib in June 1984.

The commandos who were dropped in the Dabar Shaib complex during Indian Army’s attack were part of Special Group of the 56th Commando Company of the Indian Army. They were the only unit of the Indian forces to have received specialised training at that time.

According to Sikh accounts of the battle the commandos were stunned and many of them were shot down by Sikh defenders soon after they touched the ground in Darbar Shaib complex.

The Special Group or SG commandos, as they were called those days, had been trained by an expert team of the Mossad, the Israeli intelligence organisation. The SG had been created in 1981 for special operations. The Israeli trainers were Mossad commandos who had conducted a one-of-its-kind operation to rescue hostages from Uganda’s Entebbe airport in 1977, notes a report in India Today (IT).

⊕ ALSO READ: OP-ED: The loneliness of Sikhs (by Avtar Singh)

Notably, India did not have diplomatic ties with Israel at that time and the training was said to be coordinated by the Research and Analysis Wing (RAW) which had its own arrangement with Mossad. The training was provided to Indian SG commandos at the secret base of Sayeret Matkal. 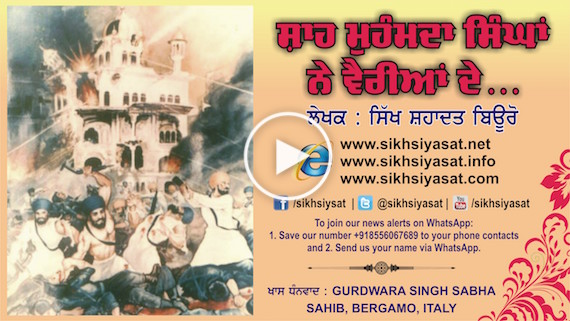