Srinagar: The state police and administration on Saturday barred the Joint Resistance Leadership (JRL) to hold a seminar on World Human Rights Day at Hyderpora Srinagar. J&K police arrested several leaders from JRL camp in order to disrupted the seminar.

JRL comprising of Sayed Ali Shah Geelani, Mirwaiz Umar Farroq and Muhammad Yasin Malik has termed the government action as “state terrorism” saying that at a time when the world was observing Human Rights Day, however administration is reluctant to allow peaceful programme and forces in Kashmir are committing massive violations of human rights, notes FreePress Kashmir. 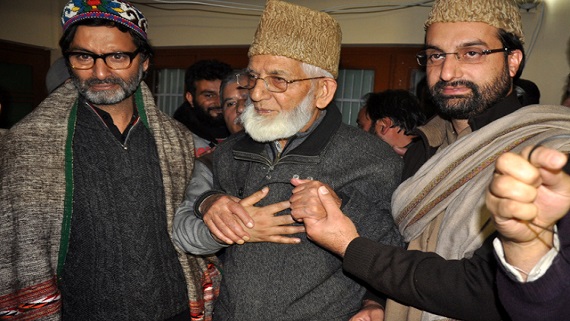 A spokesman from Geelani lead Hurriyat faction in his statement said “that since Saturday morning, all the roads leading to the venue in Hyderpora locality on the outskirts of Srinagar, were blocked by police personnel where many activists and journalists were turned away. Police placed Syed Ali Geelani and Mirwaiz Dr Umer Farooq under house arrest while as police raided residence of Mohammad Yasin Malik.”

“In the morning, a heavy contingent of police was deployed outside Geelani’s Hyderpora residence — the venue for the seminar and they also put several Hurriyat leaders under house detention to foil the seminar,” he adds.

Joint Resistance Leadership in their joint statement reportedly said that although UNO has formulated a charter in 1947 to safeguard basic rights pertaining to nations, however this institution failed to provide and secure these cherished rights. Referring to atrocities perpetrated by Indian rulers and forces, the JRL said that till now more than two lakh people were brutally killed, however it is unfortunate that UNO failed to play its role nor it could halt the ongoing bloodshed in state.

Pertinently, JRL has called for a shutdown on the eve of International Human Rights Day against Human Rights abuses in Kashmir Valley, media reports said.