Khalid was at the venue to attend an event titled ‘Khauff Se Azaadi’, organised by an organisation named ‘United Against Hate’.

Talking to reporters after being attacked, Khalid said, “There is an atmosphere of fear in the country, and anybody who speaks against the government is threatened.” 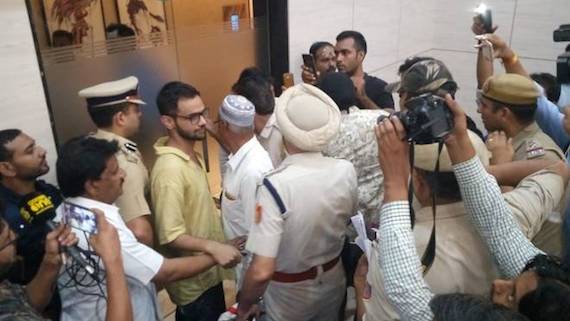 Umar Khalid (with Glasses) Shot At In Delhi, Escapes Unhurt

An eyewitness, who was accompanying Umar Khalid, said, “We were at a tea stall when a man in a white shirt came form behind, pushed and opened fire at him. Khalid lost his balance, fell down and bullet missed him. We tried to catch the man. He fired aerial shots. The pistol slipped off his hand and he fled.”

Joint Commissioner of Police, Delhi, Ajay Chaudhary said a man attacked Umar Khalid from behind while he was having tea with friends. “Khalid fell, but is safe. We are investigating what happened,” he said.

DCP Madhur Verma said they are verifying the attack. “Somebody pounced on Khalid and pushed him… then tried to fire at Khalid. But he couldn’t shoot immediately. People started chasing him. Khalid has said the man then fired in the air,” Verma said.

Minutes after JNU student leader Umar Khalid escaped unharmed after being shot at by an unknown assailant outside the Constitution Club of India, New Delhi, on Monday, 13 August, he told The Quint that he thought his “Gauri Lankesh moment” had arrived.

I was very scared at that moment when he pointed that gun at me. That moment I was being reminded of what happened to Gauri Lankesh. I thought that moment has arrived. I am very thankful for my friends who overpowered him and my life was saved. Speaking to The Quint, he said although the attempt to kill him ahead of an event organised against hate crimes was “ironic”, it was not surprising.

In June, Umar Khalid had filed a complaint with the police, saying he had received death threats from gangster Ravi Pujari. He had sought police protection.

Mr Khalid, who was one of the students accused of sedition along with Kanhaiya Kumar, had received another death threat two years ago. It happened around the time the police was looking for him in connection with the sedition case for allegedly organising an event against the hanging of 2001 Parliament attack convict Afzal Guru.