Chandigarh: As per reports in Indian Media Jawaharlal Nehru University Students’ Union (JNUSU) leader Kanhaiya Kumar today compared the onslaught on varsities with Gujarat massacre alleging both of them were carried out “with support” from state machinery even as he stressed that there is a fundamental difference between “emergency” and “fascism”.

He, however, said that there was a difference between 2002 genocide and 1984 Sikh genocide. According to Kanhaiya Kumar’s argument Gujarat violence was carried out through state machinery while the 1984 anti-Sikh violence was caused due to “mob frenzy”. 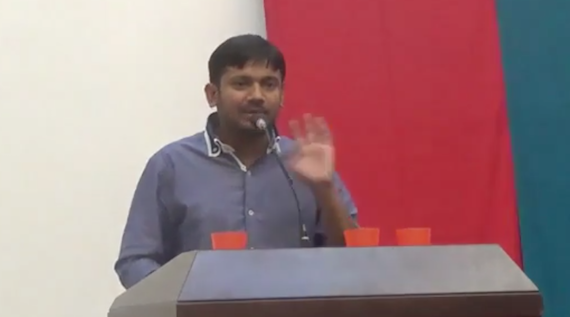 “There is a fundamental difference between a mob killing a common man and massacring people through state machinery. Therefore, the threat of communal fascism we are faced with today, there is an attack being launched on universities, because like Hitler, Modi ji doesn’t have support from intellectuals in India. No intellectual is defending Modi regime,” he added.

Kanhaiya Kumar’s comparison and advocacy for differentiating 2002 anti-Muslim genocide from 1984 anti-Sikh genocide is unfound. By facts any two events are seen are different from each other so it is always the pattern and the driving force, besides other related factors, that determines the nature of any event. Enough documentation and discourse is now available in public domain that a brief overview aforesaid two events shows that the nature of two events were largely same. Minority groups were targeted by killer gangs motivated by genocidal impulse and these gangs had active support and even participation of the state machinery, ruling politicians, police and administration.