Hoshiarpur:  Stating that the melodramatic cultist baba Gurmeet Ram Rahim deserved to be behind bars, the Dal Khalsa is of the believe that  the truth has prevailed and justice delivered by the Panchkula CBI court.

Terming the aforesaid decision of the CBI court as revival of Indian Judicial system party leaders H S Dhami, Kanwar Pal Singh, Amrik Singh Issru, Hardeep Singh Mehraj and Jasbir Singh said “had the High Court not taken cognizance of the situation and ordered the security forces to use the force if needed, the Sirsa Dera goons after going on rampage and damaging properties and vehicles would have played havoc with the lives of innocent citizens.” 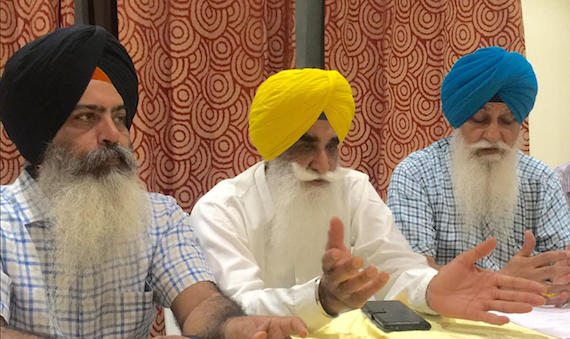 Condemning the senseless violence unleashed by the Dera cult followers, they said the violence was predictable and also the complicity of the Haryana government with Sirsa dera.

Whether it’s Congress or BJP government at centre or states, all hobnobbed with cultist leader. “The rape accused going for court appearance on 100 plus cavalcade cars under Z-plus security is enough for the world to laugh on Indian system”.

They hailed the courage shown by the judge Jagdeep Singh in delivering justice to the victim despite the build-up pressure and Dera workers threatening for bloodshed.

The judgement has shamed the politicians of all shades and the disgraced SGPC Jathedars, who toeing the line of Badals exonerated this sinner, the decision they had to chew later on when challenged and contested by the Sikh Sangat. The moral values and commitment shown by victims, their family members, CBI investigator and the judge were much higher than these spineless Jathedars, said they. The studied silence of Badal-BJP and the Congress on the court verdict explains their character.

Quoting an old saying that those who are wrong in Peshawar are wrong in Lahore, they recalled how the Indian civil society ignored all cries and concerns of the Sikhs when pseudo-Baba mocked and challenged the fundamentals of Sikhism. When we shouted that this man was a fake saint, rather a Shaitan (monster), nobody listened to us least the state and its media. We were at pains when the politicians lined up before him and the media used to describe him as a “spiritual” leader. Today, the same media is ridiculing him.