Justice in Bargarhi Beadbi Case Not Only Denied But Sabotaged: Dal Khalsa

Amritsar: Dal Khalsa today reasserted that justice in Bargarhi Beadbi case has not only been denied but sabotaged by both Badal and Amarinder Government.

The Sikh Youth of Punjab (SYP) – youth wing of Dal Khalsa gave a clarion call to masses to reach at Bargarhi on Oct 14th to pay tributes to those two Sikh protesters, who fell to police bullets on 14 Oct.

Addressing the press meet Sukhraj Singh, son of Krishan Bhagwan Singh who was fell to unprovoked police firing at Behbal Kalan and SYP president Paramjit Singh Mand informed that Shaheedi Samgam at Bargarhi would be held on 14th to mark the fourth death anniversary of both Krishan Bhagwan Singh and Gurjeet Singh. They said before the Samagam an Ardas would be performed by Sikh organisations led by SAD (Amritsar) at the firing spot at Behbal Kalan. 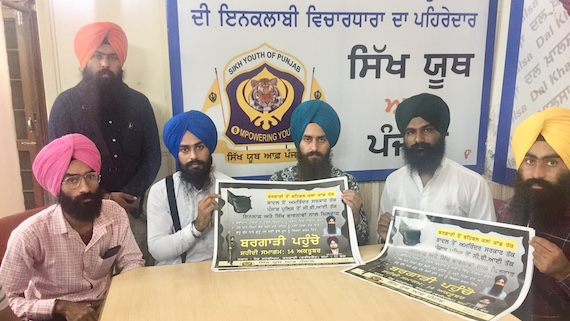 Paramjit Singh Mand said from Badal to Amarinder government and from Punjab police to CBI all were responsible for sabotaging the justice in sacrilege case. “By default the interests of Badal and Amarinder have converged to sabotage the justice and the heavily politicised police force helped their political masters to derail it, said both.

Self-contradictory statements and U-turns by Amarinder and Sukhbir on first CBI’s closure report and then reopening of Bargarhi probe was nothing but absurd and disgusting. “Both have played with justice system and emotions of hurt Sikhs”.

Meanwhile, referring to the media reports based on interrogation of arrested youths that sacrilege case has radicalized and forced them to pick the arms to avenge the desecration; Dal Khalsa leader KANWAR Pal Singh warned the political establishment to not play with or subvert justice system for their political gains.

He reiterated that to end the cycle of militancy related acts, the Punjab problem requires political resolution and the perpetrators of Nov 1984 massacre, fake encounters, enforced disappearances and Bargarhi /Behbal Kalan cases to be brought to book.