Chandigarh: A large number of organisations pertaining to students, youth, workers, including intelligentsia and social activists held an emergency meeting in the wake of ongoing region-wide protests against the pending resolve of government of India to implement Citizenship Amendment Act (CAA), National Register of Citizens (NRC), and National Population Register (NPR).

In a statement issued after the meeting it was said that they “felt that people of India are being divided by the present regime, blinded by the brute majority in the parliament, on the basis of religion against the ‘secular spirit of the constitution’.”

“This is not a question of Muslims in India, or for that matter minorities in India, there is a lurking fear of deep divide of the country on the basis of religion,” the statement reads further. 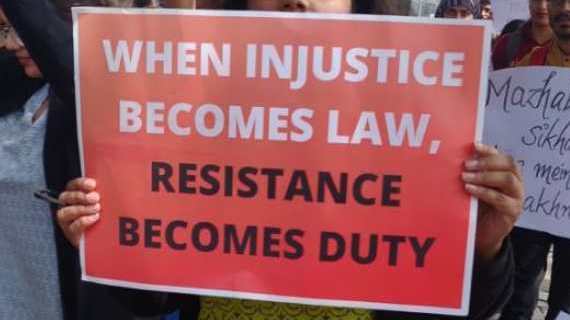 As per the statement the meeting resolved to join together on a common platform of resistance, namely, “Citizens Against Divide” which will unite people to resist the Modi Government’s move to promote and sharpen the communal hatred and divide among the masses.

Explaining the purpose of the meeting, Dr. Manjit Singh said that Bharat is facing a serious challenge to the very social fabric and the secular constitutional values, from none else than the duo comprising the Prime Minister and the Home Minister.

Pawan Kumar Bansal criticised the Modi government over misusing the names of veterans like Sardar Patel while dismantling the very constitution which he and other leaders of the independence movement built and defended. Addressing the gathering,

Advo. RS Bains said that as far as citizenship is concerned, even the constitutions of Bangladesh and Pakistan are more secular than what our government is proposing through the CAA.
Senior Advocate S. Amar Singh Chahal warned against the pending dangers to our federal structure which may have serious implications for the unity of the country.

Dr. P.L Garg said that the Prime Minister is befooling the country by spreading lies that there are no detention centers and that the government has nowhere decided upon the NRC whereas the facts speak otherwise.

Advo Rajeev Godara, hailed the initiatives being taken up by the democracy loving people of India to resist all the communal moves of the government and he pressed upon the need of such united efforts at ground level.

The statement further informs that it was decided that the Citizens Against Divide will hold a protest meeting on 1st Jan 2020 in Sector 17, against the high handedness of the UP government crushing the peaceful resistance by the common people.

It was also decided to launch an extended campaign against CAA, NRC and NPR under the slogan “Kagaz Nahin Dikhayenge”.