Srinagar: Kashmir valley today observed a complete shutdown on the occasion of the second death anniversary of Afzal Guru. The shutdown was called by pro-freedom Kashmiri groups. The Indian authorities reportedly put severe restrictions on the movement of people in various parts of the Kashmir Valley.

It is notable that Afzal guru was secretly hanged on Feb 9, 2013 at Tihar Jail in Delhi. He was later buried inside the jail premises.

Media reports say that all pro-freedom Kashmiri leaders were detained or put under house arrest and restrictions have been put in place in Srinagar on Monday. 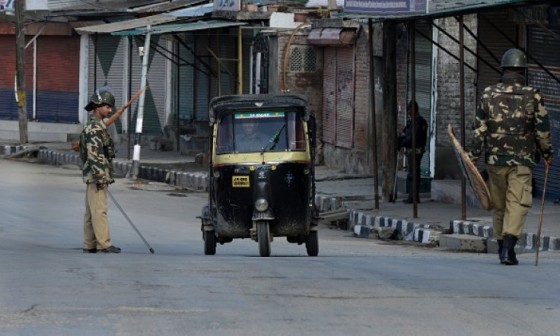 Indian paramilitary troopers stop an auto-rickshaw driver during a curfew in Srinagar on February 9, 2015

JKLF chairman Mohammad Yasin Malik was taken into custody from his Maisuma residence last evening and he is lodged at Kothibagh police station.

Hurriyat (JK) leaders Shabir Ahmad Shah and Nayeem Ahmad Khan, Hurriyat (G) leaders, Mohammad Ashraf Sehrai and Ayaz Akbar were among those put under house arrest to prevent them from staging any protests.

A massive deployment of the police and the paramilitary forces was spotted in various areas of old Srinagar.

Various roads have been blocked with rolls of concertina wires with security personnel manning the barricades.

Meanwhile, all shops and business establishments are closed in response to a strike call of the separatist leaders.

Senior Hurriyat Leader Syed Ali Shah Geelani called for a strike on the day to mourn the death of Guru.