Srinagar: A 19-year-old youth was today killed and another injured when security forces fired at demonstrators who were protesting on the second anniversary of Afzal Guru’s hanging in Palhalan area of north Kashmir Baramulla district.

Indian security forces reportedly opened fire at the protesters resulting in death of Farooq Ahmad Bhat and injuries to Reyaz Ahmad Dar, who has been shifted to a hospital here for treatment. 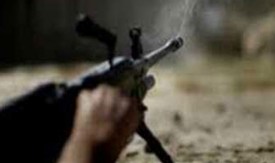 Senior civil administration and police officials have rushed to the area, 30 kms from here, where protests were going on.

Meanwhile, terming the incident as “regrettable and unfortunate”‘ police said it has registered a case and started an investigation.

“Police has taken cognizance of this highly regrettable and unfortunate incident. FIR has been registered into the matter,” a police spokesman reportedly said.

“The incident is being investigated and all concerned are being questioned to ascertain the facts,” he added.