Informing the media about the programme, party spokesperson Kanwar Pal Singh said Mr Imroz is a distinguished human rights lawyer and recipient of the Ludovic-Trarieux International Human Rights Prize of 2006. He is also the co-founder of the Jammu and Kashmir Coalition of Civil Society (JKCCS) and the Association for Parents of Disappeared Persons (APDP). He said Mr Imroz would tell the tale, plight and trauma of family members of disappeared persons who were killed allegedly by security forces in “fake encounters” in J&K. 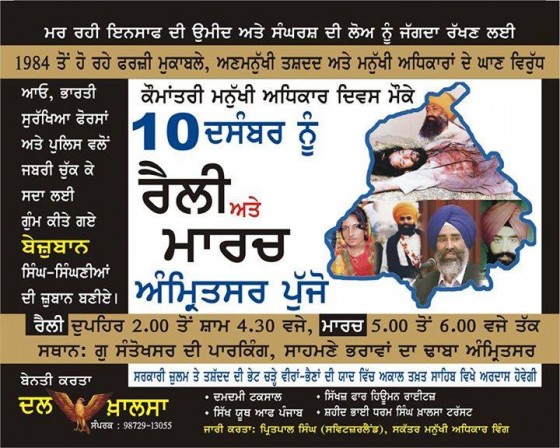 Dal Khalsa leader said their group would be holding a public gathering of family members whose near and dear ones were disappeared in police custody or killed in fake encounter by security forces during the militancy period in Punjab on Dec 10.

Kanwar Pal Singh said the agony, pain and cries of a large number of families whose children were illegal abducted, tortured and subsequently extra-judicially eliminated would share their agony and pain and cries for justice.

He said it’s an attempt to make the victims’ visible with a hope that their pain, anguish and wait for justice will be acknowledged and the violators punished.

He said at the conclusion of the rally, a candle light march would be organized on the streets of the city and ardas would be performed in the memory of victims of “state repression” at Darbar Sahib.