United Nations: Kashmiris, Sikhs and Gujarati Patels staged big demonstrations here on Thursday and chanted slogans at the top of their voice in front of the headquarters of the United Nations separately when Indian Minister for External Affairs Sushma Swaraj came to address the world body in its 70th annual General Assembly Summit on behalf of her Prime Minister Narendra Modi.

Modi opted to stay away from addressing the UN after delivering his speech in summit for Sustainable Development Goals and Peace-keeping Summit early this week.

The demonstrators kept on chanting slogans during the presence of the minister at the headquarters of the United Nations. 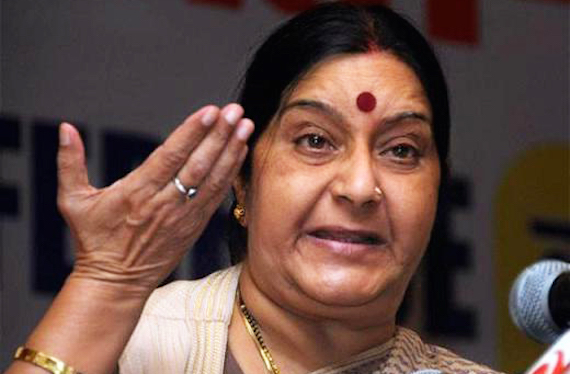 The leaders representing two divides of Kashmir are present in New York who took part in deliberations on various echelons including one that was arranged by the contact group of the Organisation of Islamic Cooperation (OIC) early this week. Modi didn’t deliver address in the UNGA Summit and left for New Delhi after meeting US President Barrack Obama.

The participants of the demonstration were holding posters and banners in support of their demands.

The demonstrators announced that they wouldn’t give up their struggle against the Indian subjugation till they got rid of it. The Sikhs for supporting their demand of separate homeland raised the slogan of “Khalistan Zindabad”. The Kashmiri protesters were raising their voice for their inalienable right to self determination and asking for a plebiscite in Kashmir in accordance to the commitments of the United Nations.