Chandigarh: As per the media reports Delhi Chief Minister Arvind Kejriwal and his Haryana counterpart Manohar Lal Khattar here on Wednesday resolved to put in “sustained efforts” to check pollution and discussed measures to ensure smog does not envelop the Indian capital city of New Delhi in the winter of 2018.

It is said that the meeting between Arvind Kejriwal and Manohar Lal Khattar lasted around 90 minutes and the core agenda of the meeting was centred around air pollution and stubble burning which is a major contributory factor to smog. The smog has engulfed the New Delhi and parts of Haryana and Punjab over the past nearly two weeks.

After the meeting both the Chief Minister addressed the media.

Arvind Kejriwal in his statement said that states may be separated by territorial boundaries, but nobody has control over air and joint efforts need to be put in by all stakeholders to check pollution. 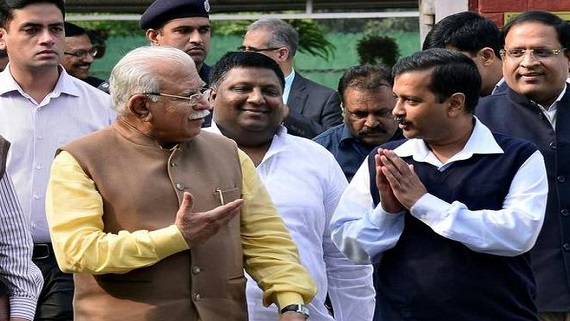 Haryana Chief Minister Manohar Lal Khattar and his Delhi counterpart Arvind Kejriwal coming out after a meeting in Chandigarh on Wednesday. Photo By (The Hindu)

“Therefore, it is very important that the country’s top political executive, both of states and the Centre, everyone will have to collectively find a solution to this problem,” he added.

“I believe today’s meeting is just a beginning. It is an indication that to deal with this problem, we are ready to take whatever steps are required to be taken. We had a discussion on crop burning, on vehicular pollution, as also on bypasses which are being built, we had a discussion on how we can introduce CNG vehicles, reads a quote from the statement of Arvind Kejriwal published in an English vernacular.

Reacting sharply on the meeting of Delhi CM with his Haryana counterpart Congress leader and Punjab’s Irrigation and Power Minister Rana Gurjeet Singh today asked the Delhi Chief Minister Arvind Kejriwal not to try to outsource the solutions to his own problems.

“The solution to problems in Delhi does not lie in Punjab or Haryana, but Delhi itself and you need to understand that”, Rana Gurjit added. Further while invoking the example of China he said that “prior to the Beijing Olympics there was too much smoke and pollution there and the Chinese government invoked modern scientific methods including artificial rains to clear it. “Why can’t Delhi government invoke similar methods instead of trying to blame other states”?

Furthermore, he said that Arvind Kejriwal was in the habit of inventing a make belief solution to the problems being faced by the people of Delhi. “Last year he came up with the odd-even scheme and spent crores of rupees on a media blitz to take political mileage of the same. This year he has come up with the idea of meeting the chief ministers of Haryana and Punjab with the sole purpose of flogging these meetings as an achievement”.

Badal Dal leader further claimed that the result of the meeting with Haryana CM Manohar Lal Khattar was there for all to see. “All he could say after the meeting with his Haryana counterpart was that concern had been expressed about health issues due to stubble burning. He could have expressed this sentiment on the phone but chose to indulge in cheap publicity on this sensitive issue even though he knew that the talks with his Haryana counterpart would not have any outcome”.

Former finance minister further claimed that stubble burning alone was not responsible for the smog in Delhi. “If that was so Chandigarh would have been the worst sufferer. The truth is that Kejriwal has failed to check vehicular pollution and is now trying to blame the farmers of Punjab and Haryana for his own failures, he retorted.