Bridgewater, NJ: Kultar’s Mime is a devised play that blends painting, poetry, theater and music to tell the stories of Sikh children who survived the 1984 Delhi Massacre in the wake of Prime Minister Indira Gandhi’s assassination. The play follows a collective of young Jewish artists who intend to commemorate the 1903 Kishinev pogrom, and in the process, learn about the 1984 massacre of the Sikhs. In a powerful moment of embracing the pain of the ‘other,’ they shift focus and decide to tell a story that the world has largely ignored. The play incorporates text from two poems: Kultar’s Mime by Sarbpreet Singh and In The City Of Slaughter by Haim Bialik. Kultar’s Mime is directed by J Mehr Kaur, a theater major at Smith College, and is being presented worldwide by the Sikh Research Institute. 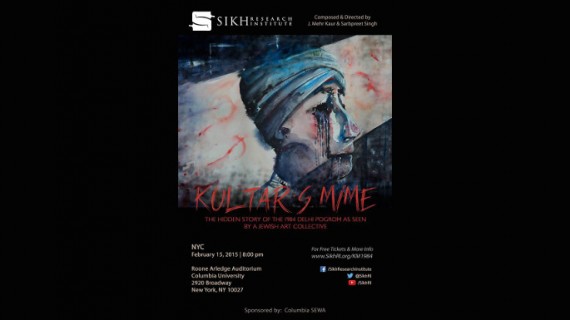 After thirty-six acclaimed performances in four countries across three continents, Kultar’s Mime is heading to the Parliament of The World’s Religions, the world’s largest interfaith event. This year, the Salt Palace Convention Center in Salt Lake City, Utah hosts the event October 15-19. Kultar’s Mime will perform Friday, October 16 and Saturday, October 17. As stated on The Parliament of the World’s Religions website, this unique gathering of people from all faith and tradition backgrounds “was created to cultivate harmony among the world’s religious and spiritual communities and foster their engagement with the world and its guiding institutions in order to achieve a just, peaceful and sustainable world” (http://www.parliamentofreligions.org).

Prior to this engagement, Kultar’s Mime was performed in India, including in Delhi on the 30-year anniversary of the massacre. It was also performed in other major Indian cities such as Mumbai, Kolkata, Chennai, and Bangalore, garnering an emotional response from overwhelmingly non-Sikh audiences. Dr. Ananda Lal, theatre critic for The Telegraph, Kolkata, writes that the play, “has remarkably sustained inventive rhyming couplets right through [the play], a literary artifice that aesthetically balances the otherwise horrific butchery that it recounts from eyewitness survivors,” while Indian Express, Chennai notes, “The audience listened, a few batting their eyelids to push back burning tears.”

According to Harinder Singh, CEO of the Sikh Research Institute, “Kultar’s Mime has re-ignited the conversation about 1984 both within and outside the Sikh community. The outpouring of compassion has been overwhelming and it is apparent that stories like these touch us all in profound ways and provoke us to reflect on the tragedy of sectarian violence that continues to plague the world.”

In addition to the Parliament of The World’s Religions, Kultar’s Mime will be performed in other locations throughout North America and Europe during October:

Abbotsford, BC – Thursday, October 1, 7:30 p.m. at the Matsqui Centennial  Auditorium

Vancouver, BC – Friday, October 2, 8 p.m. at the Norman Rothstein Theatre

Edinburgh – October 8, time and venue to be determined

Glasgow – October 9, time and venue to be determined

Sikh Research Institute (SikhRI) has partnered with local communities for the upcoming shows in Vancouver BC, Glasgow, Edinburgh, Salt Lake City and London. SikhRI appreciates the generosity of our sponsors and donors to stage the show at no cost to attendees. Every penny of your donation goes towards creating educational resources for art like Kultar’s Mime.

For details on the play, as well as show times, tickets, and a media kit, please visit www.SikhRI.org/KM1984. The play will be touring through December 2015 and there are still a limited number of open dates available. If you would like to bring the production to your community, please e-mail km1984 (at) sikhri (at) org.