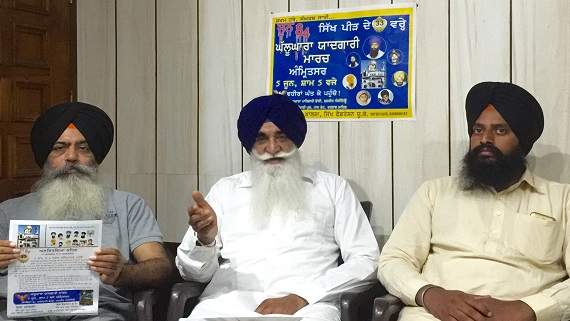 While SGPC observes this day at Akal Takhat Sahib in which representative organizations of Sikhs across the spectrum participate in the conclave, there’s need to hold such samagam at local gurdwaras too.

For the first time, Dal Khalsa has decided to reach out to all Gurdwara managements urging them to organize Ardas Divas in memory of those who died during the army assault on June 6 and adopt resolution condemning the attack on Sikh faith.

For this, letters are being sent to gurudwara managements in which contents of the proposed draft resolution has been mentioned for adoption, said the party release.

Dal Khalsa leader Kanwarpal Singh said the organization was approaching the maximum possible gurudwara managements to adopt the resolution on June 6. We propose to cover the entire state within the next three years.

“We want people at grass root level should get engaged. The entire responsibility to express Sikh pain should not be left to handful of representative groups and individuals. We all as a community should express our joint pain at all level”, he said.

It is not that there is no pain among the Sikh masses for what happened in June 84. But they need a platform to express their pain and emotions, he said.

Speaking at a meeting, party secretary Ranbir Singh said the June 1984 episode has permanently been etched on the collective consciousness of the Sikhs.

He announced that Dal Khalsa and its allied groups will take out a ‘Genocide Remembrance March’ in Amritsar on June 5 starting from Gurdwara Ranjit Avenue to Akal Takhat Sahib.

Referring to the barbaric assault by the Indian state on Sikh faith, youth leader Paramjit Singh said the wounds are raw, the pain is fresh and the struggle continues.