Hoshiarpur: The police reportedly arrested around 60 workers of various organisations, including Shiromani Akali Dal (Amritsar) and the Aam Aadmi Party (AAP) on July 24. They were demanding the release of Sikh prisoners and were holding protest in support of Bapu Surat Singh Khalsa. 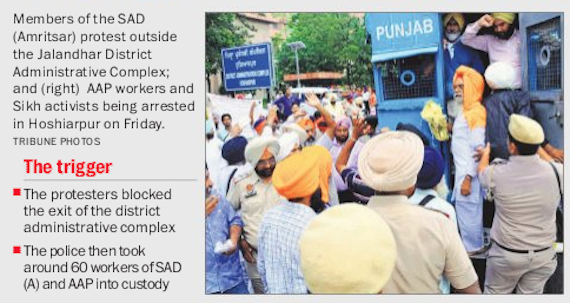 As per The Tribune (TT), the protesters first sat on a dharna outside the District Administrative Complex (DAC) in Hoshiarpur. When the protesters restricted the staff inside the complex from coming out, the police, led by SP (D) Baljit Dhillon took around 60 workers of SAD (A) and AAP into custody. They were taken to Mahilpur police station.

Samir Verma, DSP (City), said action would be taken against them as per the law.