Amritsar Sahib: A member of Shiromani Gurdwara Prabhandak Committee (SGPC) from Dera Baba Nanak has written a letter to SGPC chief Kirpal Singh Badungar seeking revocation of the resolution passed by SGPC in which it had endorsed the so-called pardon to Dera Sauda Sirsa (DSS) chief Gurmeet Ram Rahim.

Notably, a Hukamnama was issued by Akal Takht Sahib against Dera Sauda Sirsa chief in May 2007 after he had attempted to personify himself as Guru Gobind Singh Ji during a Dera activity held in Salabatpura town of Bathinda district.

In this letter the SGPC member Amrik Singh Shahpur highlighted in his letter that the so-called pardon given to the DSS chief in September 2015 by SGPC appointed Jathedars was politically motivated. The said pardon was outrightly rejected by the Sikh masses and which also lead to decline in the credibility and integrity of SGPC appointed Jathedars. 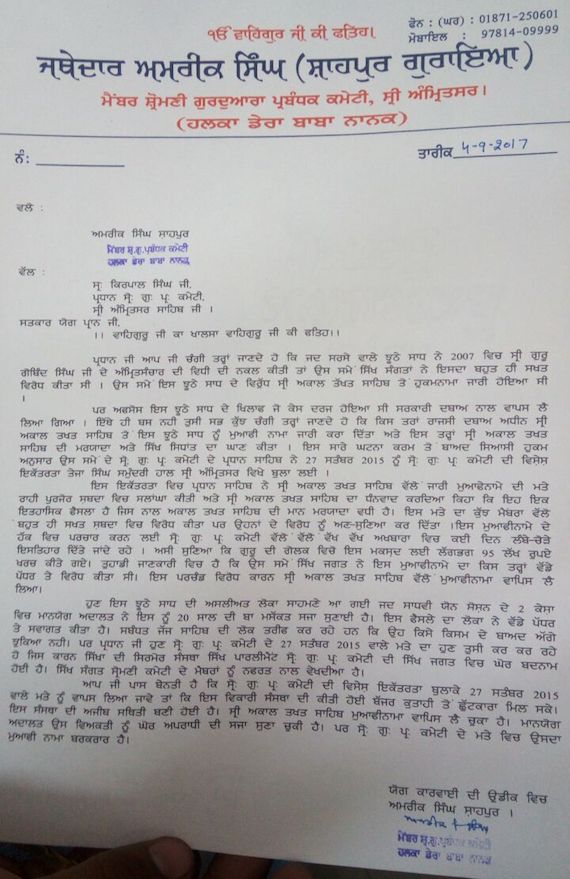 Furthermore, Amrik Singh Shahpur pointed that at that time the then SGPC chief Avtar Singh Makkar called a special meeting of the SGPC at Teja Singh Samundari Hall in Amritsar on 27th September 2015. In this meeting while endorsing the politically motivated decision of pardoning DSS chief Gurmeet Ram Rahim for his unpardonable sin Avatar Singh Makkar had praised and welcomed the decision. While terming it as a ‘historic decision’ he had event stated that the decision would bolster the institutional integrity and credibility of Akal Takhat Sahib.

In his letter the SGPC member claimed that the voices opposing the pardoning of DSS chief in the meeting were totally ignored. He further maintained that more than 90 lakh rupees was spend out of the Gurdwara exchequer to advertise the decision among the Sikh masses.

Noting that the decision to pardon the Dera chief was later withdrawn by the SGPC appointed Jathedars in wake of strong opposition from the Sikh masses, Amrik Singh Shahpur said that the resolution adopted by the SGPC to support the so-called pardon was not withdrawn. Concluding his letter, he urged SGPC chief Kirpal Singh Badungar to take necessary steps to revoke the resolution in order to save the reputation of the organisation as now even an Indian court has convicted Dera Sauda Sirsa chief Gurmeet Ram Rahim in two rape cases.