Toronto: During a whirlwind tour of the Ontario region, Dr. Manisha Bangar mesmerized crowds of Indo-Canadians with stirring calls to reject Brahmanism, unite all the world’s oppressed people in common cause opposition to oppression, and uplift the downtrodden by pursuing a society of freedom and equality.

Dr. Bangar, the Vice-President of the newly-formed People’s Party of India (PPI), began her week-long tour as the keynote speaker at the May 6 Vaisakhi Nagar Kirtan in Brampton.

Speaking before an audience of thousands, Dr. Bangar urged the community against being insular. “Sikh Sangat efforts outside of Gurdwaras are essential to unite all oppressed peoples of the world,” she said. “Khalsa Raj can only become a reality if the Sikhs empower themselves by celebrating their shared history with the Mulnivasi Bahujans and move to form strong bands of unity with all the downtrodden.” 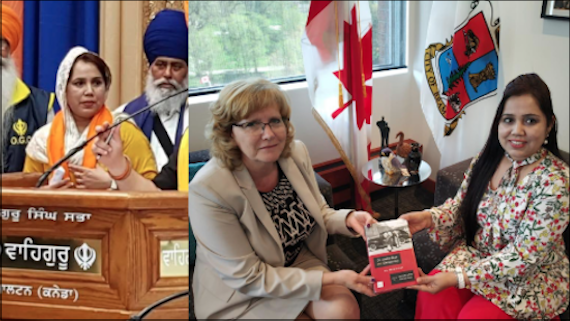 She invoked the “Nsash Doctrine” originated by Guru Gobind Singh. Also known as “The Five Freedoms,” the doctrine includes krit naash (renunciation of previous occupations to work for the Creator), kul naash (renunciation of family ties to become one family under the Creator), dharm naash (rejection of old creeds in favor of the Khalsa), karam naash (replacement of karma with grace), and bharam naash (rejection of superstitions in favor of belief in One Creator). With a special call to women, she said, “If the Sikh women follow the naash doctrine of Guru Gobind Singh Ji, they are sure to raise themselves to the highest level of female empowerment.”

Subsequently, Bangar appeared on a number of Indo-Canadian radio and television programs to promote alternative Indian media. “We need to expose the Brahmanical suppressive character of Indian media,” said Bangar. “Indian media has nothing but Brahman voices speaking and Brahman pens writing in favor of upper castes sitting comfortably in air-conditioned chambers of corporate media houses.” She took this message, along with discussion of ongoing human rights abuses in India, to Ajj di Awaaz Radio, OMNI Focus Punjabi, and Dateline Toronto (Channel Punjabi).

On May 10, Bangar met with Brampton Mayor Linda Jeffrey, a former Member of the Legislative Assembly of Ontario. She presented the mayor with a copy of Dr. Ambedkar and Democracy, an anthology edited by Christophe Jaffrelot and Narender Kumar. “We had an engaging conversation about Ontario’s health and education policy, the pitfalls of electronic voting machines, and the nature of politics,” says Bangar.

On May 11, she joined author and South Asian affairs analyst Pieter Friedrich for a forum at the Canada-India Centre for Excellence in Carleton University in Ottawa.

Friedrich spoke briefly on “The Irreconcilability of Gandhi and Ambedkar,” focusing on how Gandhi promoted racial segregation in South Africa and defended the caste system in India while Ambedkar devoted his life to the annihilation of caste. He referenced the controversial Carleton University Gandhi statue standing just outside the Canada-India Centre, saying, “It’s a symbol of racism, of oppression, and it needs to be toppled.”

“I want to leave you with two thoughts,” said Friedrich. “First, many people today talk about the need to end so-called casteism — that is, discrimination according to caste — but when we use such terminology we steer the conversation away from the real issue, which is the need to annihilate caste itself. Second, while the Indian Constitution rightly abolished Untouchability, we must remember that Dr. Ambedkar believed Untouchability was merely the logical outcome of the practice of caste and, therefore, his struggle was not specifically against the practice of Untouchability but against the very existence of caste.”

Bangar spoke about “Dr. Ambedkar in Global Context of Democracy,” discussing the propaganda tactics used against religious minorities, those historically oppressed by the caste system, and any dissenting voice in Indian society.

Referencing the Other Backward Caste (OBC) population, Bangar explained, “This is a major wedge and a major point of contention. These people were also known as a touchable caste, because they do not face Untouchability, but, apart from untouchability, they face the same distancing and deprivation of education and everything else which the caste system impregnates upon them.” She argued that OBCs are being used as scapegoats, saying, “There is a propaganda within the media and the establishment, even through the state, that these people are responsible for atrocities upon the Scheduled Castes. To a certain extent, it is true. but at the same time, they are also being made responsible for Brahmanism and the caste system. It is a targeting where you’re showing the victim as a perpetrator, or the person responsible for their own predicament.”

Bangar continued by explaining, “People who have been essentially egalitarian in their approach, they have been singularly targeted and victimized.” She said the practices of Sikhs and Muslims particularly make them a target. “The whole Hindutva nationalism, which is taking shape so aggressively, insists the majority has a righteous right to subjugate others. Sikhs, Muslims, Christians, Scheduled Castes, OBCs — all are being used as a phantom enemy and held responsible for all the government is not able to do.”

“The major issues are not being talked about,” she warned. “Every other community is being shown as an attacking demon. Even if they are talking about education, such as Rohith Vemula or the JNU people talking about their rights to representation in education, they are made as anti-national. This is so with every dissenting voice. So who is not anti-national? Who is not a terrorist in the eyes of the Brahman Raj? It is only the Brahmans and the upper class. The three percent as against the 90 percent. So all others are being pushed into oblivion by the corporate, the media, and the ruling class, which all is the same nexus.”

Offering solutions in Ambedkarism, Bangar concluded, “Ambedkar has lifted the blame out of these people. Brahmanism sees to it that every structure of democracy perpetuates this feeling of the sanctity of caste day in and day out. But Ambedkar defined democracy and made it very important to know what are the prerequisites for democracy. The crucible of his social democracy rested in raising the consciousness of the people. Laws, if at all they are there, will be limited in making an effect on the entire society if the multitude of people are determined to defy that law. If people have faith in unequal society, we cannot expect hem to have a social consciousness which will support equality, or mutual respect, or human dignity. For law to be effective, we must change the social consciousness of the people.”

“If the Mulnivasi Bahujan are brought into power, if we are given the reins of power, if we are able to make a dent for ourselves, then we will have ministries for the annihilation of caste,” promised Bangar. Until such a day, however, she emphasized that the blueprint for the oppressed is to “construct our own historicity, our own hermeneutics, our own pedagogy.”

Bangar and Friedrich were also joined at the forum by Dr. Chinnaiah Jangam, a professor of South Asian history at Carleton University who recently authored Dalits and the Making of Modern India.

On May 12, Bangar joined Pieter Friedrich and Bhajan Singh for the Toronto release of their book, Captivating the Simple-Hearted: A Struggle for Human Dignity in the Indian Subcontinent. At the book launch, she said, “History, right from 500AD until 1800 and something, was the dark ages of India. In that, the light was shone at the time of Guru Nanak Dev Ji. The entire Sikhi movement which flowed from him for 600 years following is something which has dispelled the darkness. This particular book comes to us as a torchlight to bring hope to us in our present struggle for reclamation of human dignity.”

Bangar then shifted to a symposium on National India News (NIN), an alternative media outlet for which she serves as Executive Director.

“Mainstream Indian media presents a threat to democracy,” said Bangar. “It is not a free media because it is a Brahman media. Even before being a marketable media, or an agent media, or even a silent media, it is a Brahman media. There is a need of the hour to develop Bahujan media to bring about true democracy worldwide.” In support of NIN, speaking as Founding Director of Organization for Minorities of India (OFMI), Bhajan Singh said, “Let’s move forward. As Dr. B. R. Ambekdar said, ‘let’s move the caravan forward.’”

Later that day, Bangar joined Friedrich and Singh for a visit to York University to pay respects and present a bouquet of flowers to the Ambedkar bust located in the university’s Scott Library.

That evening, all three concluded Bangar’s Canada tour with a series of presentations at a Buddha Jayanti celebration hosted by Ambedkar Mission, Toronto.

Singh discussed the ancient atrocities perpetrated against Buddhism in the Indian subcontinent, explaining how Buddhism was uprooted from the subcontinent by Brahmanical philosopher Adi Shankaracharya, who destroyed or seized control of Buddhist temples. “We must read our history,” he concluded. “We must have the courage to stand up for what is ours. And we want to prevent any further uprooting. We are not being rooted out of our temples now. They want to root out our bodies, our souls, our minds, our knowledge. We are going to have the courage to stop it by coming together as brothers and sisters, learning about the common bond, the one family, the one thought that we all came from.”

Friedrich praised Ambedkar, saying he led by example in showing that “it was necessary to adopt a free and egalitarian religion or philosophy.” He added, “His life’s work was the annihilation of caste. I think that word, that term of ‘annihilation’, is crucial to remember. On Buddha Jayanti, I want to reiterate and call for a return to Babasaheb Ambedkar’s original goal, which was the revolutionary idea of annihilating caste and, in its place, creating an egalitarian society where all human beings are equal and are treating each other with respect.”

She discussed how the real threat facing Buddhism internationally is infiltration of Brahmanical elements into Buddhist groups. “There is a conspiracy to undermine, twist, and subvert the values, heritage sites, and viharas of Buddhists in India,” said Bangar. “I implore Buddhist intellectuals to be vigilant and guide the Buddhist community against these organized forces.”