*Author, Indira Prahst, is a Vancouver, BC, Canada based sociologist. She sent a write-up to the Sikh Siyasat News today about Bapu Surat Singh Khalsa’s struggle for Sikh political prisoners.

Bapu Surat Singh Khalsa, who has been on a fast unto death since January 16 demanding the release of 65 Sikh prisoners languishing in jails after having served their time, has inspired Sikhs and others all around the world for his willingness to make the ultimate sacrifice to achieve justice for others.

And among those whom he has inspired are his own children, two of whom, Mandeep Kaur and Roopinder Kaur from the United States, I met at Surrey’s Khalsa Day Nagar Kirtan earlier this year. I met Mandeep Kaur again at the Commemoration of Operation Blue Star in San Francisco as she was raising awareness about her father’s hunger strike.

In following this case, I contacted Mandeep Kaur this week after hearing of her father being forcefully taken to the hospital and the arrest of his supporters. She told me how distressed she was and also gave me a number to contact her father directly. When I contacted the house in Hassanpur (Ludhiana district), her sister, Sarvinder Kaur, informed me that her father had stopped drinking water, and since his mouth was so dry he was not speaking. 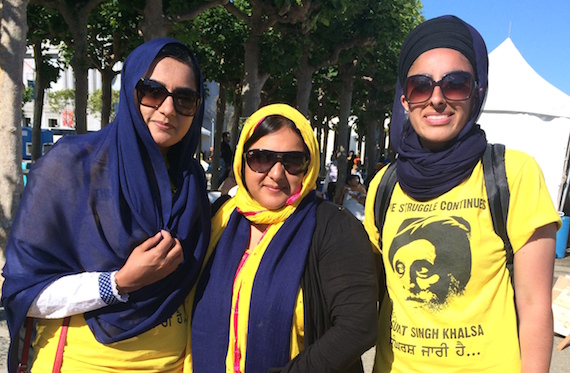 The focus of this piece is to illuminate through the voices of Mandeep Kaur and Sarvinder Kaur, how much they are inspired by their father which has transformed them and sparked a global movement, as well as reflections about their father which may help shed light on his remarkable strength and tenacity.

Part of my interview with Sarvinder Kaur in Hassanpur on Tuesday:

Indira Prahst: How is your father responding to what happened when the police raided your home, arrested visitors and forcefully took him to the hospital?

Sarvinder Kaur: This time it was very painful for him and all his followers. He had said if Punjab Police came to arrest him then he is going to stop drinking water and lemon water in his hunger strike. So the minute they put him on the stretcher and took him to the hospital, he stopped drinking water. Last night, his mouth was so dry he could not even talk. Now he is not unconscious, but he is not [fully] conscious. … He is getting worse health-wise.

Indira Prahst: What were the last words he said to you last night?

Sarvinder Kaur: He said to tell everyone he will fight for Sikh prisoners until his last breath.

Indira Prahst: What is it that led him to make such a sacrifice?

Sarvinder Kaur: My father was thinking that the political prisoners have served their time in jail and are not being released. He could not see that. He was so disheartened and disappointed.

Indira Prahst: Where do you think your father’s willpower comes from?

Sarvinder Kaur: From our Guru Granth Sahib. Guru Gobind Singh taught us to always fight for human rights, so he chose the same path. My father is a very religious person. He cannot see someone not get their rights. … I do not think he is going to back down from that.

Indira Prahst: The momentum is huge now. What do you think might happen?

Indira Prahst: How do you feel about the situation?

Indira Prahst: What values did your father instill in you and when was the last time that you laughed together?

Sarvinder Kaur: He wanted us to get well educated and to always stay close to Sikhism. … That is what I remember. …We were laughing a few months ago when my father asked me for some water and I asked him, “Daddy, how come you are that strong? It has been so many months since you have been living on water only. If I have to live on water, I would die in one week.”  He said: “I can live even longer than this because I am not scared of death. I am living with my willpower which is strong.” And so, that is when we laughed together.

Part of my interview with Mandeep Kaur back in May in California:

Indira Prahst: Has your father’s hunger strike transformed you?

Mandeep Kaur: Yes, it has. I was a normal person working full time and raising my kids, but since January 15, things changed. … Being a Punjabi and Sikh, anything that attaches to 1984 just hits you. When I was talking to my brother I was thinking how could I help, so I created a page to let people know what was happening. I remember when I had one like on the page and now it is more than a million and more than 30,000 are following him.

Indira Prahst: How has this inspired you?

Mandeep Kaur: My father is my inspiration. If he can go through all of this, why can’t I? I am really committed to the cause right now and regardless of what happens to him, whether the political prisoners come home or not and he does lose his life, I don’t want it to stop here. … I want everyone who was part of the struggle to continue.

Indira Prahst: How is your fathers sacrifice connected to his faith and 1984?

Mandeep Kaur: My father became an Amrithari in 1971, Saint Jarnail Bhindranwale was in his Panj Piaray and after that he became close to Bhindranwale. My dad was a government school teacher and when he had time off, he would spend time with Saint Bhindranwale…. In 1984, at Darbar Sahib when they were getting everything ready, he asked Saint Bhindranwale if he needed help, and he said, right now you have a lot of family obligations so you go back (we are five sisters and a brother). So, dad came back and in the meantime, the attack happened and he (Bhindranwale) became Shaheed, so my father always felt he needed to do something for the quam. He did not want to work for a government so he left his job and he became fully dedicated to the Panth.