Trenton, USA: New Jersey Senate President Steve Sweeney presented a resolution to the East Coast Sikh Coordination Committee and members of the greater Sikh community on September 12 designating November 12, 2019, as World Equality Day in recognition of Guru Nanak ji’s 550th Parkash Gurpurab. Guru Nanak ji was the founder of Sikhi, which has nearly 30 million followers throughout the world and roughly one million devotees in the United States. 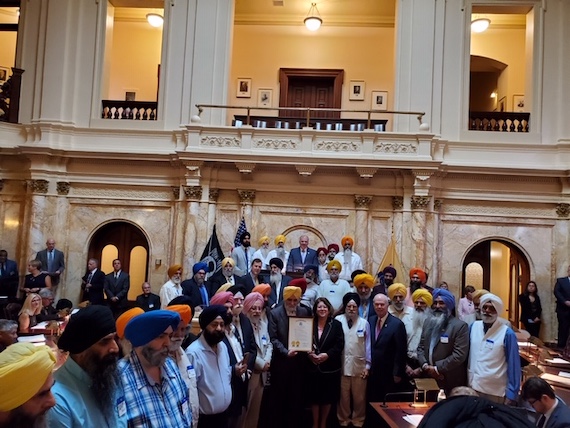 Senate President Steve Sweeney presented a resolution to the East Coast Sikh Coordination Committee and members of the greater Sikh community on September 12, 2019

‘Sikhism is a religion rooted in the belief that every person is equal, regardless of race, gender, sex, or creed. That is why we found it fitting to designate the 550th [Parkash Gurpurab] of its founder as World Equality Day’, said Senator Sweeney (D-Gloucester/Salem/Cumberland). “These guiding principles of the religion are important aspirations, particularly in this divided time, and ones we could all benefit from working towards.”

“The Sikhs are a swiftly growing influential force in New Jersey, both politically and economically,” said Harjinder Singh, Media Spokesman of Sikh Coordination Committee. “I would like to thank the Senate President for recognizing our determination in making New Jersey a welcoming home for all Sikhs, while also strengthening our relationships and bonds with every community in New Jersey. I and the entire Sikh community look forward to working with him in the future.”

Guru Nanak ji denounced the caste system and emphasised on common bonds shared by all of humanity. The movement strives to conquer communal hatred and division. A holistic understanding of peace, supported by the ideas of equality and fraternity, is an integral part of the Sikh tradition.