The new standards will give 109,000 students, this time in North Dakota, the opportunity to now accurately learn about the Sikhi and the Sikhs.

The Sikh Coalition has been campaigning to ensure that every public school student in United States has the chance to learn about Sikhism accurately.

“It is critical for students across the country to learn about their diverse neighbors,” said Satjeet Kaur, Sikh Coalition Executive Director. “Sikhs have been contributing to the American fabric for over 125 years, and these new standards will help ensure North Dakota students can learn this history and be prepared to engage with the Sikh community.” 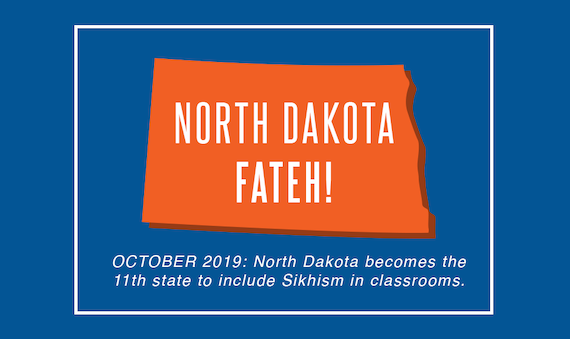 Image used for representational purpose only | Source: Clip-out from a poster by the Sikh Coalition

“The update to North Dakota’s social studies standards resulted from months of behind the scenes advocacy led by the Sikh Coalition. In November 2018, the initial request was made for Sikhism to be included in the new standards”, she added.

“We are delighted that North Dakota has made their standards more inclusive,” said Pritpal Kaur, Sikh Coalition Education Director. “It is critical that Sikhism should be represented accurately in the K-12 education system and taught alongside other world religions.”

“The new, more inclusive standards will start to be implemented immediately during the 2019-2020 school year and the Sikh Coalition will continue to work closely with the NDDPI as they engage in professional development and resource creation around the new standards”, reads a release by the group.

North Dakota becomes the 11th in a growing list of states – including Arizona, New York, New Jersey, Texas, California, Tennessee, Idaho, Colorado, Michigan, and Oklahoma – that have worked with the Sikh Coalition to include accurate information about Sikhs in their public school social studies standards. These efforts are now positively educating approximately 42% of all public school students.