New Delhi (PRESS RELEASE): Panthak Seva Dal (Regd.) on 21st February, 2017, at New Delhi released a booklet containing details financial frauds allegedly committed during tenure of Sarna Brothers in DSGMC. It was alleged by Kartar Singh Kochhar that SAD ( Badal) and Sarna Brothers have a mutual and reciprocal agreement, accordingly SAD ( Badal ) has not taken any action during last 4 years, despite in possession of all audit reports and records.

Addressing the press S. Kartar Singh Kochhar said that Guru Harkishan Public School, Punjabi Bagh situated in Ward Constituency of S. Paramjit Singh Sarna and Manjinder Singh Sirsa ), a multi lakh scam was detected which was pertaining to the tenure of Chairmanship of S. Manjeet Singh Sachdeva, who is also contesting the present elections, as candidate of Shiromani Akali Dal Delhi from Rohini ward. It was further explained by him that the fees collected from students were not accounted for in the books of accounts correctly. In the books of accounts the amounts have been accounted for less than the actual receipts from the students by tempering carbon copy of the particular fee receipt. He produced parent copy and school copy as samples with respect to Receipt No. 21997 dated 12/05/2009, Receipt No. 21712 dated 31/03/2009, and Receipt No. 21831 dated 13/04/2009 showing difference between duos. He claimed 155 cases for that financial year with tempered receipts. 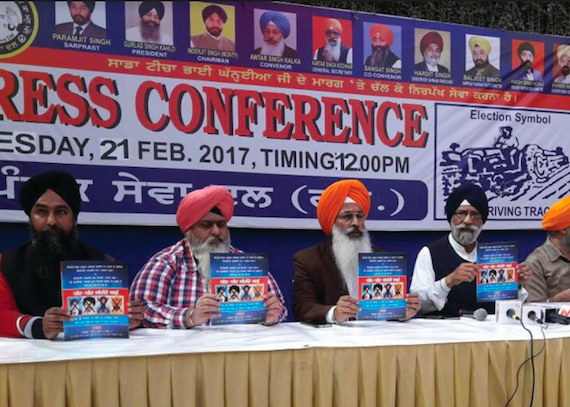 He also revealed that in another institute “Guru Nanak Institute of Management and Information Technology (GNIMIT)” adjoining GHPS Punjabi Bagh, there was misappropriation of funds for exceeding Rs 1 crore during the tenure of J. S. Gujral, involving Rs 71,54,700 in misappropriation of Fee from students, Rs. 30,90,849 booked without appropriate bills and paid in cash, a sum of Rs. 30,72,444 wither paid on Kachha bill or on duplicate bills, Wrong Tax Deduction at Source (TDS) for Rs. 7,59,490 against which no refund was claimed from the Income Tax Department despite the DSGMC is exempt from Income Tax, further another sum of Rs. 2,00,866 on account TDS by others in which wrong PAN was mentioned. Two scams of Rs. 9, 44,000 and 2,37,000 were claimed to be committed in purchase of Library Books and misappropriation of Rs. 18,457 in Medical Bills)

It was also claimed that additional fee on account of extra classes was being charged from the students, which were arranged in some hotel or other place but fee collected from the students in cash never deposited in the Institute/ College. Further , the premises was used as ‘ Examination Centre” for various competition examinations but no amount was deposited in the accounts of the Institute / College, but amount had been distributed out of the college / institute.

The investigation process initiated by S. Kartar Singh Kochhar against the then Director Mr. J. S. Gujral but during the pendency of inquiry S.Paramjit Singh Sarna accepted the resignation of Mr. J.S. Gujral and infatuated the whole process of inquiry. Thereafter, the present committee managers did not take any action against the culprits despite having all details and auditors reports in their possession which indicate an adjustment between these two parties. All this was being happen in the most important area of Punjabi Bagh, which is constituency of S. Paramjit Singh Sarna and S. Manjinder Singh Sirsa.

In the same line, he further claimed that, during the tenure of Chairmanship of S. Kanwaljeet Singh Sodhi, total loss to the institute occurred of Rs. 89, 12,675/- in Poly-Technique College at GHPS Campus, Vasant Vihar due to unjustified payment to some ineligible companies.

He further showed copies of vouchers, claimed to be on account of fresh vegetables, which were in very bad handwriting cannot be read. He claimed that around Rs. One crore per month was being withdrawn through such voucher without supply of any vegetable during presidential of S. Paramjit Singh Sarna, Sr. Vice President S. Bhajan Singh Walia, Genral Secretary S. Gurmeet Singh Shunty.

He claimed that vouchers and details worth Rs. 4,93,72,688 pertaining to period from 01/04/2012 to 31/08/2012 are in custody of the Courts of Patiala House . He also questioned the Auditors’ Report and Balance Sheet for the year 2012-13 submitted by the present office bearers as it was conducted without vouchers as mentioned hereinabove. Moreover, the Auditors Report has no mention about these vouchers.

He submitted that the office bearers of present committee were busy in money making and in luxurious travelling, hence could not take any action against Sarna Brothers, despite their promise during last election in 2013.

He also questioned validity of SAD as a religious party and slammed its alliance with S. Gurmeet Ram Rahim Singh of Dera Sachcha Sauda.

S. Kochhar claimed that the Panthak Seva Dal alone is fulfills the parameters to become a religious party which is registered under the rules duly registered with Income Tax and other authorities and being run by general Sikhs for the betterment of Sikh community.