Chandigarh: Alleging that Chief Minister Parkash Singh Badal and his family is having extra ordinary cordial relationship with the ‘tainted’ Congress leader Kamal Nath, Senior leader of Aam Aadmi Party, HS Phoolka today dared Badal to persuade Modi to open the case regarding massacre of Sikhs in front of Rakab Ganj Gurudwara in 1984 and role of Kamal Nath in it, within two months.

Apart from Badals for ‘protecting’ the newly appointed In-Charge of Congress’ Affairs in Punjab, Kamal Nath, Phoolka also blamed PPCC Chief Captain Amarinder Singh for ‘distributing’ clean chits to ‘tainted’ congress leaders allegedly involved in the massacre of Sikhs, with an eye to get power.

Phoolka was accompanying by Head of Legal Cell of AAP in Punjab, Himmat Singh Shergil and Head of Women Wing of the party, Professor Baljinder Kaur. 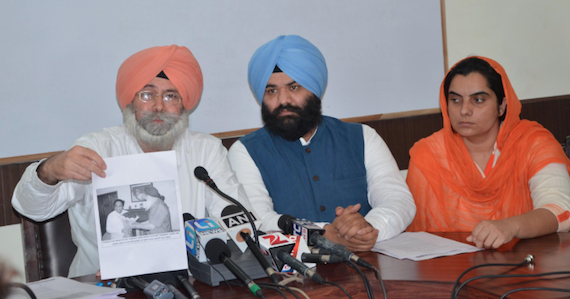 HS Phoolka said that as Captain needs help from both Kamal Nath and Jagdish Tytler to get declared as Congress’ Chief Ministerial candidate in Punjab, in a political desperation he is distributing ‘Clean Chits” to all tainted leaders.

Replying to a query, HS Phoolka said “I don’t know why and how the hired Poll Strategist of Congress Prashant Kishore enabled appointment of Kamal Nath as In-charge of Punjab?, but giving clean chit to Nath by Amarinder is a cruel joke with the Sikhs”.

“We sacrificed everything to ensure justice for Sikhs, but Captain is trying to save the culprits of Sikhs to ensure his chair”, Phoolka said adding that Captain is claiming that it was first time when name of Kamal Nath for his involvement in the anti-sikhs riots came in fore, but the truth is that Kamal Nath’s involvement was published in Indian Express newspaper and another English daily in the same month after the genocide of Sikhs in 1984.

Even Senior Journalist of an English Daily, Sanjay Suri in his statement to the Nanawati Commission revealed about the role of Kamal Nath for leading the mob in front of Rakab Ganj Gurudwara, Phooka said.

Conspicuously, in-spite of ample evidences against Kamal Nath, no case was registered against him, he revealed.

HS Phoolka accused Badal for helping Kamal Nath and even released a photograph in which Chief Minister Badal is offering flowers to Kamal Nath and claimed that this photo was taken at the residence of Kamal Nath.

He said that it is the best opportunity for Akalis, who claim to be champion to protect the rights of Sikhs, to ensure justice for Sikh victims, as he is partner in the union government.

“There are ample evidences against Kamal Nath for his involvement in leading the mob to massacre Sikhs. So both Badal and Amarinder should ignore their personal equations with Kamal Nath to ensure justice to Sikh Community”, he added.