Chandigarh: Responding to the call given by 40 farmers organizations asking the people to celebrate new year with the protesting farmers, the Dal Khalsa urged the masses to join farmers sitting at Singhu, Tikri and other borders of Delhi on 31st Dec to mark the beginning of 2021 and pray for the success of farmers cause.

As the famers have staged a determined protest against the three contentious laws challenging the fascist policies of the BJP Govt led by mighty Prime Minister Narendra Modi, the Dal Khalsa declares ‘The Protesting Farmer’ as person of the year.

Party leader Kanwar Pal Singh said the three contentious farm laws relate to mainly the trade dimension of the farm sector and are considered to be a step towards facilitating monopoly control of the corporate on the farm sector. 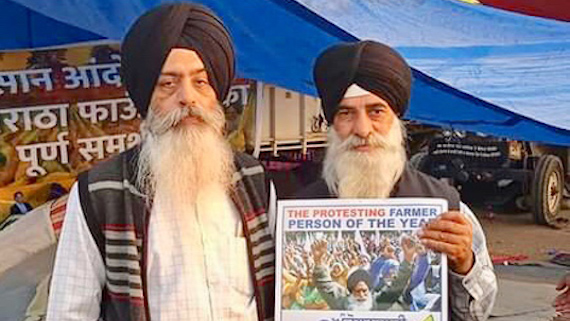 As both the sides are meeting today, he said instead of repeatedly harping on the amendment offer that has been already turned down by the farmer unions, the Union government should shun ego and concede to farmers demand by repealing three “black” laws.

Another party leader Jasbir Singh Khandoor hits out at Punjab based BJP leaders for bad mouthing against agitating farmers. The saffron party is a traitor of Punjab and farmer community in particular and their leaders are facing stiff resistance in Punjab because of their treachery. He urged the masses to rein them in.

Hitting out at BJP leader Tarun Chug for name calling the protesting farmers, he said it’s their (BJP) idiocy and autocratic decisions that have thrown the region into turmoil.