Kapurthala: The Sultanpur police reportedly removed musical instruments from the premises of Anad Foundation, a music academy run by Aam Aadmi Party leader Bhai Baldeep Singh. The academy was being run in the historical Qila Sarai of Kapurthala. Media reports note that the police was not possessing any court orders to get the premises vacated.

Even though Bhai Baldeep claims to have permission to use two rooms, the police stacked all his musical instruments and other items outside the building on August 04. 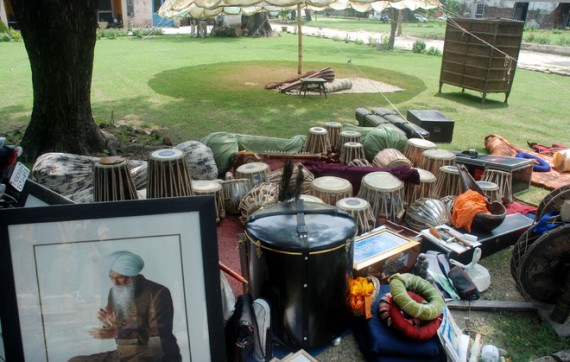 Musical instruments of Anad Foundation lie in the open | Photo: The Tribune

Bhai Baldeep Singh Singh has even uploaded a copy of the allotment letter issued by the then DSP on May 9, 2011 on his Facebook wall.

However, Deputy Superintendent of Police (DSP) Davinder Singh claimed that the foundation had failed to show any authorisation to occupy the rooms in the Sarai.

Since the Sultanpur Lodhi Police Station and the DSP’s office are also housed in the Sarai, the DSP claimed, “It was no longer feasible for the police to let the foundation occupy the rooms near the police station as it was a security issue. We vacated the rooms after asking them to do so repeatedly.”

A news reported by The Tribune notes that Bhai Baldeep Singh has alleged that the police were even threatening to arrest the students if they didn’t stop coming to the institute. He also alleged the police ill-treated the students, pushing them around.