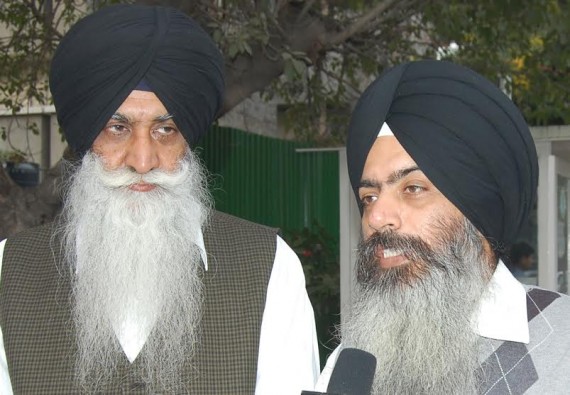 Party spokesman Kanwar Pal Singh and human rights activist Harpal Singh Cheema said the Delhi police following unconstitutional and unjustly orders from Union Home Ministry have unleashed crackdown on JNU students and booked Prof Geelani of Delhi University under sedition laws for raising their voices against Indian states faulty decision to hang Afzal Guru three years ago. “There’s have been flagrant violations of laws from PSA to UAP Act (1967), from AFSPA to sedition provisions be it in Kashmir, Delhi, Punjab, Nagaland or elsewhere”. They cited the recent example of how Punjab police overlooking judicial verdicts invoked sedition laws against organizers of peaceful congregation of Sikhs on Nov 10“.

Even as there’s a clear cut verdicts by Apex Court and high courts of other states as to what makes the offence under sedition, yet police and investigating agencies hardly take into consideration such judicial verdicts while invoking sedition provisions against political dissidence. They said there has been considerable rise in incidents of police excesses and intolerance.

They said the act of JNU students and seminar at Press Club of India organized in memory of Afzal Guru was in no way seditious nor did it evoke violence thereafter. However the police going overboard and conniving with ABVP- the student’s wing of ruling RSS-BJP had gone against the spirit of law and democracy by charging organizers of both the events under provisions of sedition.

Urging the Supreme Court to take suo moto notice, they demanded intervention of Chief Justice of the apex court to order the cancellation of two separate FIR’s against JNU students and Prof Geelani. He sought release of student’s union president Kanhaiya Kumar and stopping of witch-hunting of university students. He asserted that hailing Afzal Guru and Maqbool Bhutt as a martyr should not be construed as threat to India’s integrity.

Calling Prof Geelani a friend of Sikhs, both the leaders said, he was being targeted because while sitting in New Delhi, he fearlessly speaks against human rights abuses of not only Kashmiri’s but also of other struggling minorities and oppressed peoples.

Linking it to the JNU students uproar, the Dal Khalsa believes that  the threat call by lesser known don Ravi Pujari to Hurriyat Conference chairman S A Geelani is handiwork of India’s dirty tricks department. They said it reflects frustration of country’s political and security establishment. “No gangster big or small, could dare to harm Geelani Sahib unless and until he has the tactical backing of the Indian state”, said he. “Life and death is in the hands of Almighty and prayers of millions of people irrespective of their religion and region would protect Geelani Sahib”, he remarked.