New Delhi/Kohima: Post election distress can be seen in the political landscape of Nagaland, that too before the maiden assembly session that is scheduled to take place on 13th March. The reason behind this “discontent” is attributed to the distribution of cabinet berths among the alliance partners of People’s Democratic Alliance (PDA) front.

As reported by the local media sources in Nagaland  the two alliance partners – National Progressive Democratic Party (NDPP) and Bharatiya Janata Party (BJP) – are wrangling over who will corner the plum cabinet berths, thus delaying the distribution of portfolios. On March 8, 11 ministers were sworn in, besides NDPP leader Neiphiu Rio as the chief minister.

It is widely believed that such a friction between BJP and NDPP could trigger political uncertainty in the state. It is said that the Naga People’s Front (NPF), the single-largest party in the recent elections, housing their MLAs in two different hotels in the state capital, Kohima, to keep a strict watch on them in order to avoid political poaching. 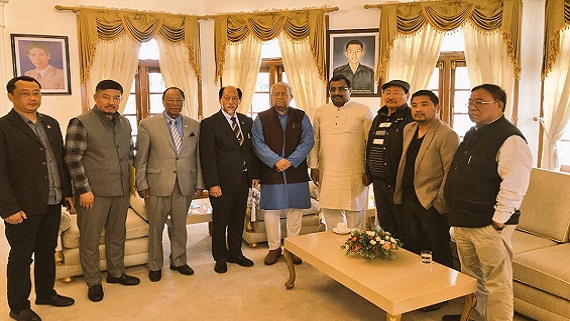 Ram Madhav along with BJP and NDPP leaders at Raj Bhavan on March 4 to stake a claim on forming the government. (File Photo)

NPF, with 27 seats, is just four short to meet the simple majority mark of 31. Since NDPP is not yet a registered party, the Tenth Schedule of the Indian constitution, which bars MLAs from defecting to another party unless they comprise two-thirds of the legislators of that party, is not applicable to it.

With BJP’s central leadership keeping out of the government “some of the party’s MLAs to create space for new entrants from other parties”, including naming former NPF MLA and home minister Y. Patton as the deputy chief minister, there have been reports of discontent among some BJP MLAs too.

According to NDPP’s inside sources, though the party has the largest number of MLAs in the new government at 18, “It has managed to get only four of the 12 cabinet ranks while the BJP, with 12 MLAs, has pushed our party leadership to give it six of them, including the post of deputy chief minister.”

“While most of our NDPP MLAs are already unhappy as it has benefitted the BJP more even though it has less seats, the BJP is now demanding that all the top portfolios be given to it, leaving only the finance department to us. This has created further simmering of discontent,” reads the statement of NDPP insider published in an English vernacular.

On the other-hand the BJP’s party insiders whilst speaking to The Wire on anonymity confirmed the aforesaid claims, stating that on March 11, BJP national general secretary in charge of the Northeast, Ram Madhav, arrived in Kohima to convince Rio about the party’s portfolio demands. “However, the speaker would most likely be from NDPP,” the sources further added.

Furthermore, veteran politician and NDPP legislator Pohwang Konyak while talking to local media persons said that after sacrificing (a cabinet berth) in the interest of the PDA coalition, and after giving what was demanded (by the BJP), “it was not fair that BJP was arm-twisting (the NDPP) to get plum portfolios.”

“Just because BJP is ruling at the Centre does not mean that the party can act like this,” further reads his statement published in The Nagaland Post.

“The saffron party knows that Rio is at their mercy for the second time; the first was in 2003 when BJP got seven seats and supported the NPF (led by Rio as the chief minister) to form the Democratic Alliance of Nagaland (DAN) government.”

Meanwhile, “the NPF is closely watching the drama and has still not lost hope of forming the government with like-minded parties.”