Chandigarh: Punjab Chief Minister Amarinder Singh has urged Government of India’s Minister of External Affairs Sushma Swaraj to take up with the Government of Pakistan the issue of opening of the corridor from Dera Baba Nanak to Gurdwara Kartarpur Sahib.

In a letter to Sushma Swaraj, the Chief Minister said Kartarpur Sahib was one of the most revered religious places for Sikhs as Guru Nanak Ji spent last years of his life there. 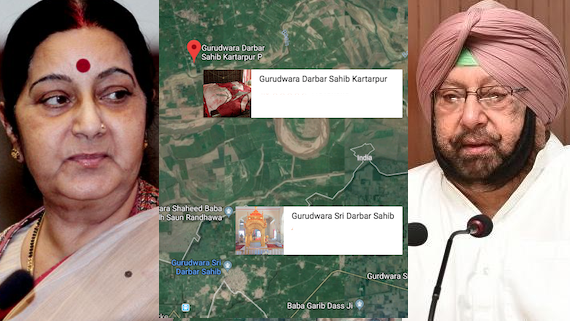 Pointing out that the Gurdwara lies around 4 km westwards from Dera Baba Nanak, District Gurdaspur (Punjab), on the Pakistan side, he said the Government of Punjab had, time and again, requested the Government of India to take up with the Government of Pakistan the issue of opening a corridor from the International Border to Kartarpur Sahib, reads a press release issued by the CMO.

Referring to the 550th Parkash Gurpurab of Guru Nanak Ji, being observed in November 2019, the Chief Minister apprised the External Affairs Minister that the Punjab Vidhan Sabha had passed a unanimous resolution on August 27, 2018, seeking uninterrupted opening of corridor from Dera Baba Nanak to Sri Kartarpur Sahib in Pakistan, the statement reads further.

It may be recalled that the Chief Minister had earlier also urged Sushma Swaraj, through a D.O. letter on August 20, 2018 to take up the matter with the government of the neighbouring country. In that letter Amarinder Singh had said that the centre should open the corridor temporarily in wake of 550th Gurpurab celebrations.