“Taking a strong stand on the issue, which Punjab Governor VPS Badnore also endorsed by saying that coordination on the Tricity development related issues was already being done, the Chief Minister said there was no question of agreeing to Khattar’s proposal”, reads the release. 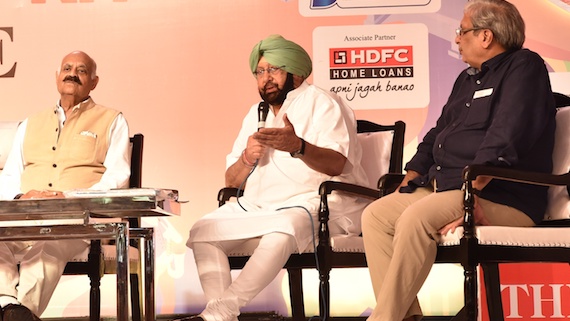 The release also stated that Captain Amarinder Singh asserted that Punjab, being the only state without a capital, had a historical right over Chandigarh. ‘Various accords in the past had given Chandigarh to Punjab but they were, unfortunately, not implemented’, he added.

The state of Punjab has strong claim over Chandigarh and the people of Punjab have fought tough political struggle get back the capital city that was turned into ‘Union’s Territory’ when the state was reorganised in 1996. It is also a hard fact that Punjab’s participation and intervention in Chandigarh administration has gradually eroded and Punjabi language and culture was being vehemently uprooted from Chandigarh.

Chandigarh administration has been ignoring continuous efforts and struggle by Punjabi people, who were uprooted from their villages to built the city, to make Punjabi as administrative language of Chandigarh.

Punjab’s share in employees’ block employed by Chandigarh administration has been gradually reducing.

Punjabi language is disappearing from public signboards, milestones, official work and educational institutions in Chandigarh. All this points towards failure of successive Punjab governments to prevent this erosion.

Though the CMO has presented Punjab Chief Minister’s assertion as a ‘big achievement’ in itself, but the matter of fact is that in the light of track-records it appears to be fake roar than anything of substance because mere assertions are not going to change the court of happenings and he did not put forward anything which could indicate that the CM has any plan to make efforts to take back Chandigarh for the people of Punjab.