In view of this development, the Dal Khalsa leadership has decided to send its five member jatha on June 5 at 5 pm to Akal Takhat to pay homage to martyrs of the faith.

In view of pandemic outbreak and shopkeepers facing financial crisis and depression due to continuity of lockdown since March 24, the Dal Khalsa has taken the decision to not give the Amritsar Bandh call this year. 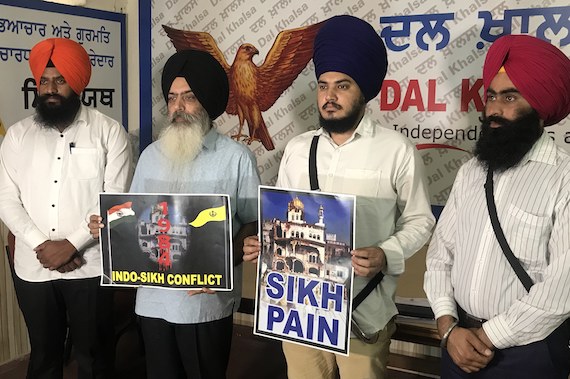 S. Kanwar Pal Singh (2nd from Left) and others

Addressing the press conference, Dal Khalsa spokesman Kanwar Pal Singh said the march of five Dal Khalsa men will be symbolic in nature. He said the wounds of the army attack in June 1984 are simmering and the pain is fresh.

He said they had given in writing that they would adhere to WHO and Govt guidelines, and the strength in their march would be minimized and physical distancing norm would also be strictly maintained. He said their religious sentiments to hold the march has not been respected.

He said they believe that the Union government decision to open religious places on June 8 has been deliberately planned to thwart gathering at Akal Takhat on June 6. He questioned the Indian Government to explain whether the deadly virus will eradicate after 8th? The timing of opening of religious places after June 6 explains that the decision is intentional and taken in view of week long observations by Sikhs throughout Punjab. He took exception on the silence of Akal Takhat Jathedar Gaini Harpreet Singh for not taking up the matter with the government.

He said that the government should not arrest or harass youth who wants to pay homage to the martyrs on June 6 at Akal Takhat or any other Gurdwara Sahib.