Chandigarh: In a press release issued this evening, the Punjab government made tall claims while announcing the arrest of two youngsters aged 21 and 26 years by Batala police.

Similar claims were made when the Nawanshehr police had arrested few teenagers in Banga on April 2.

The release uses specific terms to negatively label the arrested youth while maintaining that they were carrying out alleged “hate crimes” in the state. 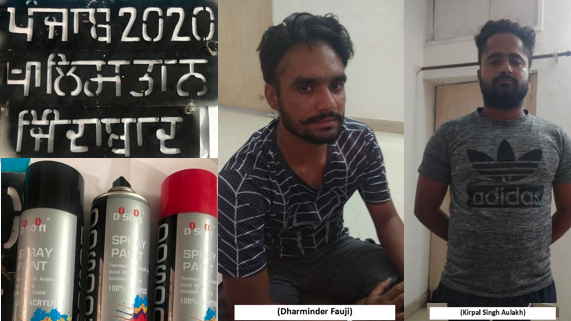 According to the Punjab government, arrested youngsters were allegedly “indoctrinated, radicalized and funded by their foreign-based handlers, including Gurpatwant Singh Pannun, Legal Advisor to Sikhs for Justice (SFJ)”.

As regards purported recoveries from the arrested persons, the press release states: “One 32 caliber Revolver was recovered from the personal search of Dharminder Singh, while a .30 caliber Pistol was recovered from the possession of Kirpal Singh. During the search of his house, posters regarding Sikh Referendum 2020, stencils of Khalistan Zindabad and Referendum 2020, and spray paint bottles were also recovered. One Bajaj Platina motorcycle used by duo in the crime has also been recovered“.

Interestingly, the stated list of recoveries shows that arms were recovered from the arrested persons but there is no mention of section of Arms Act in the list of sections in which the FIR is registered. Moreover, the list of sections in FIR includes section 307 of IPC but the statement released by the Punjab government does not tender any details about any attempted murder.

Notably, the copy of FIR was not available online on the website Batala police till the time of writing this news therefore the details of FIR could not be reviewed or verified by the Sikh Siyasat News (SSN).

The statement also mentions a video reportedly tweeted by Gurpatwant Singh Pannu in which some US-based group allegedly affiliated to SFJ had allegedly issued threat to Punjab Jail Minister. The statement however does not clarify that whether there was any link between the the video and the arrests?

The statement reads: “The arrests came even as a US-based Khalistani group affiliated to SFJ issued a video threat to Punjab Jail Minister Sukhjinder Singh Randhawa for his opposition to its referendum on creation of a separate homeland for Sikhs. The threat had been tweeted by Pannun, apparently in response to Randhawa’s open criticism of the referendum launched by SFJ in Canada and the United States“.

“The Punjab Police, which has taken a serious view of Pannun’s video threat, has initiated a probe into the matter, as well as detailed investigations to ascertain the SFJ Legal Advisor’s links with Dharminder Singh (21 years) and Kirpal Singh (26 years), who were arrested from the former’s house in village Harpura Dhandoi in Batala“, the statement reads further.

Besides Gurpatwant Singh Pannu, the statement also makes mention of Paramjit Singh Pamma (UK), Mann Singh (UK), Deep Kaur (Malaysia) maintaining that they were motivating and financing the arrested persons to carry out various type of acts, including violent acts, to give publicity to campaign for the ‘liberation of Punjab’ from the Indian government. The statement also alleged that the campaign is ‘funded and sponsored by ISI’.

“The accused have told the police that they were indoctrinated after being contacted on various social media platforms (such as Telegram and Whatsapp) by these foreign based handlers. They had been asked to spray-paint Referendum 2020 slogans and to put liquor vends and government properties on fire during the Ghallughara week, they further told the police“, reads the statement.