Chandigarh: As per media reports the Punjab government has lined up about 14 bills that are set to be presented during the Vidhan Sabha session beginning on Thursday. 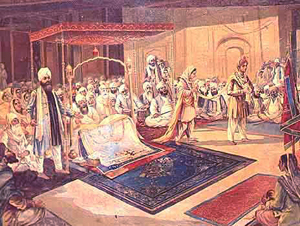 [A portrait depicting the Anand Karaj]

Notably, the Indian parliament had amended the Anand Marriage Act, 1909 in 2012 to provide for registration of Sikh marriages under the Act.

The 2012 amendment in Anand Marriage Act provides only for registration of Sikh marriages and so far as the other aspects of the personal law are concerned, the imposition of Hindu code on Sikhs would remain intact.

Truth about amendment to Anand Marriage Act – achievement for Sikhs or fraud with Sikhs by Dr. Daljeet Singh