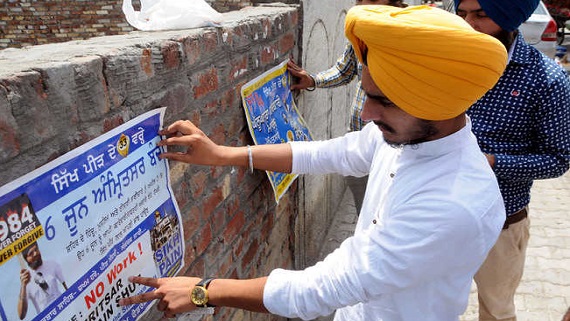 A young Dal Khalsa activist putting up a poster ahead of remembrance march 0n June 6th.

In a written statement issued in Gurmukhi, the copy of which is  available with the Sikh Siyasat News (SSN), SAD (Mann) chief said that 6 June is a painful day for the Sikhs and ‘Amritsar Bandh call was an equivalent  attempt to ignore the seriousness of the issue’.

Talking to the Sikh Siyasat News (SSN) over phone, Dal Khalsa leader Kanwarpal Singh said that ”the Amritsar Bandh call was being given by the Dal Khalsa for last four years. ‘Shut-downs are strongest democratic political tools to express resentment against state’s atrocities. We are not in favor of forcing shutdowns, therefore we make appeal to the masses to observe shut down on 6 June.”

He further maintained that from the last four years the bandh call has been a success.

Responding to a query about SGPC chief’s appeal about joint event at Akal Takht Sahib he said that Prof. Kirpal Singh Badnugar had met him to disucss the Ghallughara Samagam issue. ‘The SGPC chief had sought co-orperation to hold join event at Akal Takht Sahib on 6 June and we ensured him that the Dal Khalsa would co-operate in every possible manner. But there was no discussion regarding distinct events announced by Sikh organizations’, he said while adding that ‘had Prof. Badungar raised the issue of Amritsar bandh call with us, we would have expalined him the matter to his staisfaction’.